This project, funded by the Arts and Humanities Research Council, began in October 2006 and ran for three years. It has involved exploring the two-way relationship that exists between law on the one hand, and social and economic change on the other. In particular it has examined the proposition that the rules and machinery of civil law substantially influenced both the readiness with which individuals committed resources to transactions and agreements of all kinds, and shaped behaviour towards the persons and property of others.

This project, funded by the Arts and Humanities Research Council, runs for three years from 1 September 2009, is based within the Department of History and Welsh History at Aberystwyth University, and is supported by the Institute of Medieval and Early Modern Studies (Aberystwyth - Bangor). The aim of the project is to use this underexploited source to explore aspects of medieval society and economy, politics, religion and expressions of identity in new ways.

The religious houses of medieval Wales have long been overshadowed by their more numerous, generally more prosperous, and normally better documented neighbours east of Offa's Dyke. So as to identify more firmly Wales's place on the monastic map of Europe, this new large-scale project seeks to establish a comprehensive monastic history of medieval Wales, the findings of which will be made available to scholars and students, as well as the wider public, both electronically and in print.

The Origins of Modern Mass Culture: European Leisure in a Comparative Perspective 1660-1870

This project was initiated by a European Science Foundation funded exploratory workshop held in Wales in September 2010. It seeks to facilitate contacts between historians and other scholars working in the field of leisure, leading to the establishment of a new, interdisciplinary and transnational research agenda on the history of European leisure culture from the early modern to the modern era.

Over the last few decades the study of seaside resorts has become part of the main stream of urban history. This project, supported by funding form the Board of Celtic Studies, University of Wales, represents the first phase of a wider study of the resort towns of Wales and the Bristol Channel region. Attention has initially been focused upon Aberystwyth, Tenby and Swansea, and the period 1750-1914. Outputs include a web-based bibliography and various research publications.

This project, funded by the Leverhulme Trust, runs for three years from 1 September 2011.  The project, which is a collaborative interdisciplinary venture in association with the Department of Theatre, Film and Television Studies, aims to provide the first full critical study of the development and role of the British press in the Second World War, integrating the history of the wartime press within the wider social, cultural and political context of wartime Britain, and exploring what role the press had within them.

With the centenary of the end of WWI falling in November 2018, the Department of History and Welsh History was delighted in spring 2018 to be awarded a grant from the National Lottery Heritage Fund for a project that would enable students to work with community volunteers to explore, interpret and preserve the stories of the Aberystwyth community as it was during wartime one hundred years ago

The project, Aberystwyth at War: Experience, Impact, Legacy, 1914-1919, ran from May 2018 to November 2019.  It explored the impact of the First World War on the people and communities of Aberystwyth through the collaborative efforts of volunteers, local archives, the university, local history societies, schools, and performance and arts groups. These groups engaged with wartime records, letters, newspapers, photographs, music, war memorials and personal histories held at our partner organizations the National Library of Wales, Ceredigion Archives and Ceredigion Museum, as well as at the Aberystwyth University Library and public places in the area.  Over 70 students and local volunteers captured and interpreted these community histories in activities, displays, exhibitions, performance and accessible online resources. 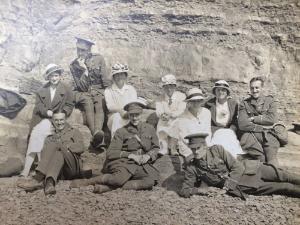