IBERS farms have started sowing winter wheat at Morfa Mawr, Llanon in an attempt to reduce next year’s cost of production, and Dr. Huw Mc Conochie, Aberystwyth University IBERS Farms Manager is encouraging other farmers to follow suit, in order to cut costs and develop crop systems that make the most of the land.
Part of the IBERS farms mission is to adapt the expertise and research of the Institute’s scientists to improve farming in Wales and beyond. 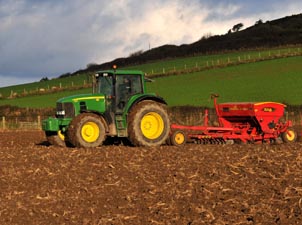 The successful harvest of maize silage and grain in early autumn, is now being followed by planting 25ha of winter wheat.  IBERS, Farm Manager Dr. Huw McConochie says “Many farmers believe it’s too late in the season to sow winter crops but as long as soil conditions allow, you can sow winter crops up until late January”

This strategy is the result of the ever-increasing global value of wheat both in the short and long term – future prices are already reaching in excess of £147 per tonne.  “It’s not too late to look into the future, plan ahead and reduce the cost of next winter’s feed by sowing your own winter wheat” explains Huw.

Currently the price of wheat is already higher than the cost of growing at around £130 per tonne, providing farmers are able to achieve a yield of around 4 tonnes/acre. The straw produced also has a value in excess of £40 per tonne of cereal produced, which makes it even more attractive to livestock farmers.

In order to reduce the cost of establishment, to preserve soil structure and encourage soil biological activity, IBERS uses a min till system which includes a 5 metre cultivator and 3 metre trailed drill.
According to Huw; “In contrast to conventional crop establishment methods such as ploughing and drilling with a power harrow combination this system can cope with marginal soil conditions which is important when the weather is poor and soil conditions are marginal during the autumn and winter”.

Looking forward to next year, spring cereals are an ideal crop to follow winter forage crops “Root and brassica stubbles offer excellent opportunities to establish cereal crops using the min-till system, as the soil is very easy to work, ploughing after these crops only reverses the good work done by the crop in controlling weeds” says Huw

Winter cereals at IBERS are harvested as grain whereas the spring cereals are often crimped or harvested as whole-crop forage which is a very successful cover crop for establishing new leys.

“We like to be innovative in the way we establish our crops and in the combination of crops we grow” commented Huw, “as a research farm we are always open to developing new farming methods and would welcome any ideas from farmers and companies alike for innovative ways of producing more home-grown feeds.”