Keep up to date with the latest project news

Come and have a look around, it’s VERY nice!

Nearly all the building work has now been completed and yesterday the furniture lorry arrived to deliver all the new furniture for the refurbished space. We can’t show you any of the furniture yet – that’s a surprise for the official opening next month, but we do have a photo of the lorry! Details of […]

We’ve just received a summary of the many improvements being made in the Iris de Freitas room in the Hugh Owen Library – we hope you’re as excited as we are! There will be: • 44 study desks, each with their own PC. Two of these will be height adjustable • 140 desk spaces, with […]

The Iris de Freitas room is coming along nicely, the new windows having recently been installed. The windows facing West (on the front of the building) are tinted and heat-reflecting, which will make the room a more comfortable space for all. It’s planned to be reopened in November, and we’re all very excited to see […]

Good progress is being made on the refurbishment of the Iris de Freitas room on Level E of the Hugh Owen Library over the summer. As of 26 June 2009: • the room is cleared ready for 3 new bookable group study rooms • acoustic baffles on the ceiling are being installed to reduce noise […]

Exciting to see how plans for the refurbishment of the Iris de Freitas room on Level E of the Hugh Owen Library are progressing. The architect has provided us with a “fly-though” 3-D representation of the refurbishment so far: https://youtu.be/-Uosb6VwfJA (by kind permission of George and Tomos architects) and come and visit the library to […]

To prepare for refurbishment work on the Iris de Freitas and Hermann Ethe rooms on Level E of the Hugh Owen Library during summer/autumn 2019, this area will now be closed to users from 13:00 on Wednesday 29th May after the final exam has taken place. We expect to re-open the space on the 4th […]

A focus group has been held on the planned refurbishment of the Iris De Freitas room. Six participants joined staff and the architects who are working on the refurbishment to talk through the current plans. The focus group session helped to gather student feedback along with surveys and the post-it note board in the Iris […]

A photo of the Iris De Freitas Room.The Iris De Freitas room in the Hugh Owen Library will be closed for refurbishment from the 3rd of June. We expect to re-open the space on the 4th November 2019. During the planning process we asked the users of the room to give us their suggestions for […]

Hello everyone, Following on from a successful launch we are delighted to see the newly refurbished Hugh Owen Library Level D in full use. Our Group Study Rooms are busy and the library floor is full of students revising hard for their exams. The space was officially reopened by our Vice-Chancellor, Professor Elizabeth Treasure on […]

Between end of May and November 2019, Information Services will be refurbishing the Iris de Freitas Room on Level E of the Hugh Owen Library. We have already consulted with users of this space through a survey, suggestions board and 1-to-1 interviews, about their thoughts on the space and have taken their comments and suggestions into consideration. Key findings from engagement with users were: 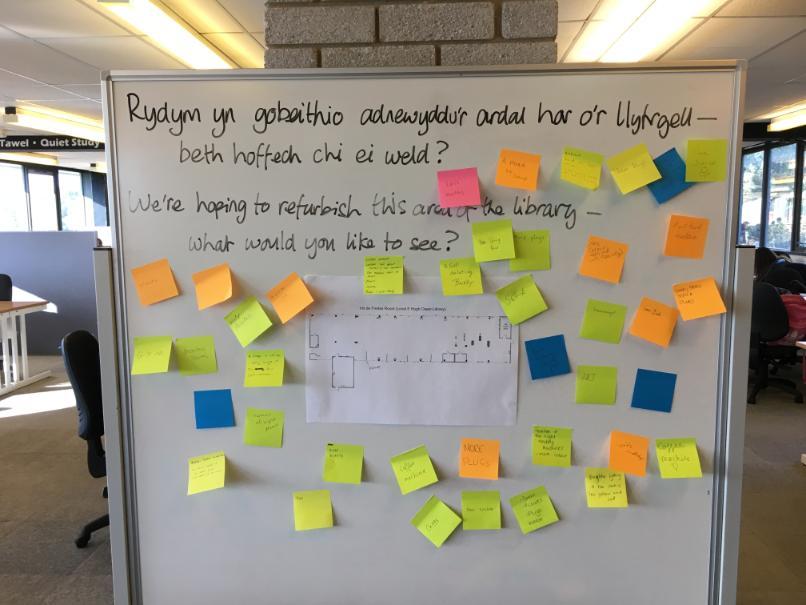 Work will start on the refurbishment immediately after the last Semester 2 exam, from 13:00 on Wednesday 29th May and we expect to re-open the space on the 4th November 2019. During this time there will be no access at all to the Iris de Freitas Room. Access to other areas of the library will be unaffected. The route from the south entrance to Level D of the Hugh Owen Building to the Level E foyer and the access route to the Parry Williams building and back of Arts Centre could be affected for some periods of time – we will provide details closer to the time of the works.

The refurbishment work will result in a far more inviting and attractive space for users. We will be adding additional group study rooms. Bespoke training/events space in the Hermann Ethé Room and a small vending area is planned. Furniture and décor will be updated, and ventilation and lighting will be improved.