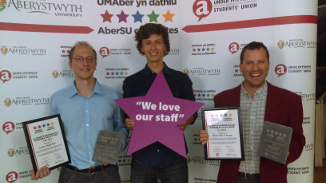 Statisticians Kim Kenobi and Jukka Kiukas were recognised at the 2017 Student Led Teaching Awards, held last Friday. Jukka, who started lecturing just last year, won the category of Innovative Teaching for his blend of tablet and traditional teaching methods, while Kim won Personal Tutor of the Year, a role which he described as a privilege, being commended for his good listening skills.

Congratulations also go to Daniel Burgarth, nominated for Postgraduate Supervisor of the Year, and Kieran Quaine, nominated for Student Representative of the Year. And also to Jackie Hedley, IMPACS admin, and to Steve Fearn and David Lewis, IMPACS technical support, for being nominated in the category of Support Staff Member of the Year.