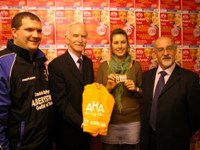 Thursday 23 November 2006
Bus service clocks up 2000 students
AHA (Ar Hyd Aber), the University's travel permit for students, has clocked up 2000 registered users since the beginning of this academic year and the number of journeys taken every week has topped 6000.

The pass, which costs £30, was launched in September 2005 by the University and Arriva as part of a strategy to reduce congestion and pollution in the town and relieve pressure on car parking both on-street and on the University's campuses.

This is the second year Sarah has used the permit.
“At first £30 seemed a lot for a bus pass but it certainly paid for itself over the year. It enabled me to travel home to Swansea for half the normal return fare of £12 and on a few occasions to Cardiff. Here in Aberystwyth it enables me to go shopping more or less anywhere in town without having to worry about walking home, heavy bags in hand.”

John Bastow, Operations Manager with Arriva North West and Wales said:
“We are absolutely delighted with the response of the students to the AHA scheme. The aim now is to build on the success of the first year and work with the University to improve the service.”

Dr John Harries, Pro Vice-Chancellor with responsibility for Estates and Projects,  said:
“The University is very pleased  with the outcome  of this collaborative venture  with the Guild of Students and Arriva. There is no better indicator of its success than the sheer numbers of students who use the service. This reduces the number of car journeys in and around town, but also hopefully students will see that buses are a much more economical means of getting to and from Aberystwyth than bringing their own cars.”

Ben Gray, President of the Guild of Students said:
“We are very pleased with the take up of the AHA scheme. It furthers our aim to reduce carbon emissions which is set out in our environmental policy while at the same time enhances the range of services we offer to students in collaboration with the University. This is a significant bonus.”

In one 5 day week (October 16-20), 5570 journeys were taken by card holders. The vast majority were local journeys but the figures include over 70 long distance journeys. On average each pass is used 3 times every week which accounts for approximately 6000 journeys.
The AHA cards are available for students and UWA staff from The Guild of Students. Application forms are also available from the Porter’s Lodge on the Penglais Campus.