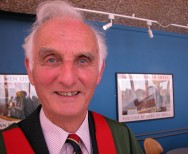 Wednesday 21 February 2007
Sir John Houghton to lecture on climate change
Sir John Houghton, CBE, FRS, will be giving a guest lecture on Wednesday the 21st of February climate modelling, climate prediction and the role of the IPCC (Intergovernmental Panel on Climate Change). The lecture takes place at 5pm in the Physics Main lecture theatre in the Physical Sciences Building.

Sir John is Chairman of the John Ray Initiative. He has held positions as Chair or co-Chairman of Scientific Assessment for the Intergovernmental Panel of Climate Change (IPCC), 1988-2002, Professor of Atmospheric Physics at the University of Oxford, 1976-1983, Director General and Chief Executive of the UK Meteorological Office, 1983-1991, Chairman of the UK Royal Commission on Environmental Pollution, 1992-1998, member of the UK Government Panel on Sustainable Development, 1994-2000. His publications include The Physics of Atmospheres, Global Warming: the Complete briefing and The Search of God, can science help?

Sir John was the 2006 Japan Prize Laureate for his pioneering work on global change, and in July 2006 was made Fellow of the University of Wales, Aberystwyth.

All are warmly invited to attend this opportunity to hear a world authority speaking about climate change.