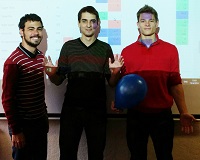 Three Aberystwyth University Computer Science students in the first week of their first year in Aberystwyth took part in the United Kingdom and Ireland Programming Contest.

On 4th October Tomas Mikalauskas, Nedialko Petrov and Bruno Smarsaro Bazelato represented the University and competed against 68 teams from 20 Universities.

The event was part of the ACM International Collegiate Programming Contest, and was sponsored by IBM and Google.

This was the first time that Aberystwyth University had taken part, and was one of nine host locations.

The aim of the contest was to solve eleven programming challenges in five hours. They were not allowed help or use of the internet.

Tomas explained some of the challenges and processes of the competition “The hardest task is to understand what kind of algorithm you need to write. There were times when you read the task and thought for 20 minutes or longer what the problem wants from you.

When you have an idea of the algorithm then you need to write a code. You then send the code to a judge, who runs through all possible test variants and then while it compiles and runs your code, you cross the fingers and hope that there are no problems.”

The team finished 59th out of 68 teams, 61 of which managed to complete at least one challenge. Seven teams failed to solve any challenges.

Dr Amanda Clare, lecturer in Computer Science said "Our team didn't win the competition, though they did manage to solve one of the problems. But what makes it astonishing is that they're first years in their first week of term and they asked us to be allowed to take part."