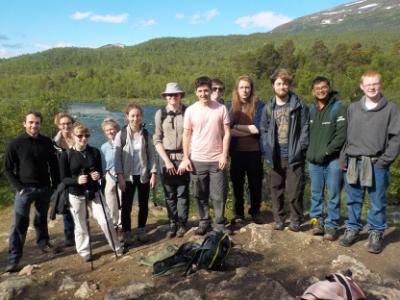 The lucky discovery of four-leaf clovers in the sub-arctic could prove valuable to future plant breeding research.

Students in IBERS made some lucky discoveries on a recent fieldtrip to the village of Abisko in the Swedish Lapland to study Arctic Ecology.

In addition to seeing several Arctic-alpine plant species the students also found several red clover plants (Trifolium pratense L.). These were growing in disturbed areas near paths, houses and the rail road. On closer examination of the area, the students made the exciting discovery that a surprising number of plants had four, five and even six leaves.

IBERS is an internationally recognised research and teaching centre and a world leader in grass and clover breeding and has an active red clover breeding programme that seeks to improve dry matter yield and resistance to pests and diseases.

Abisko is a small village in northern Sweden, 200km north of the Arctic Circle. The area is a popular destination for tourists visiting the renowned Abisko National Park and scientists there conduct significant ecological research on the impacts of climate change.

Over a century ago, the iron ore industry brought with it the construction of a railway through the village which, interestingly was built by many workers from Ireland, leading some to question whether the Emerald Isle is the original source of Abisko’s clover plants.

Ecology student Kate Gwynn said "We have seen some amazing fauna and flora in this area but did not expect to see four leaf clovers in the sub-arctic region”. Plant Biology student Hattie Roberts added “This was quite a find for us given what IBERS does!”

Plant breeder and leader of the IBERS Plant Breeding Group, Professor Athole Marshall said "Four leaf clovers are of course very uncommon and we do not fully understand whether the fourth leaf is caused by genetic or environmental factors or a combination of both.

Clearly these particular plants are existing under extreme environmental conditions and it would be interesting to see how they got there and how they are related to red clover germplasm in other parts of the country and more widely across Europe.

Factors that contribute to improved yield and resistance under harsh conditions such as those in Sweden, could be valuable to the plant breeding programme”.