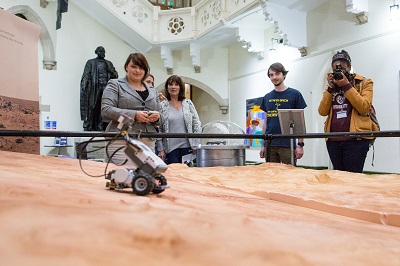 A scale model of the terrain of Mars on display in Old College as part of Space Week.

Aberystwyth University’s Department of Physics is inviting members of the local community including students and staff, to discover more about exciting developments in space research taking place on their doorstep, as part of World Space Week (4th - 10th October 2016).

Declared by the United National General Assembly in 1999, World Space Week is the largest annual space event with activities held across the world to celebrate, educate and inspire the general public and children about space.

In keeping with this year’s theme of Remote Sensing Enabling Our Future, Aberystwyth University will be taking part in the global celebration with examples of remote sensing from Earth to Space. The public display will be in the Old College between Tuesday 4th – Friday 7th October (09.00 – 18.00).

Some of the other exciting events on during the week include a scale model of the terrain of Mars which will be on display showing the entire surface of Mars and the Gale crater; this is currently being studied by NASA’s Mars Science Lab rover ‘Curiosity’ which was built by physicists at Aberystwyth University using data from MOLA, the Mars Orbital Laser Altimeter.

Models of flight hardware being produced in Aberystwyth which will fly to Mars on the European Space Agency’s 2020 ExoMars Rover Mission will also be on display.

Rachel Cross, a Research Associate in the Department of Physics at Aberystwyth University, is one of the organisers:

“Scientists at Aberystwyth University have long been involved with space exploration. For example the robotic arm of the recently rediscovered 2003 Beagle2 mission was developed and calibrated by researchers at Aberystwyth, and this work provided the basis for Aberystwyth’s current involvement with the ExoMars European Space Agency mission in 2020.

“In addition to all the other activities, we will be holding a special ‘Meet the Experts’ event on Wednesday, 5th October between 15.30 – 18.30 in the Old College, where researchers and student ambassadors from the Department of Physics and the interdisciplinary Aberystwyth Centre for Space and Earth Monitoring (ACSEM) will be on hand to answer space and remote sensing related questions and discuss their research. It’s a free ‘drop-in’ event which is open to all - we look forward to seeing you there!”

Other exhibits include a pop-up planetarium, interactive challenges, glacial images from the Centre of Glaciology’s Unmanned Ariel Vehicle (UAV) flyover in Switzerland and a ‘spot the glacier’ challenge. So come along and control a mini-lander on the harsh Martian landscape or explore the planets using interactive software - there’s something for everyone.