"We have the first samples in the bag!"

One of the quartzite boulders dumped onto sandstone bedrock on Fossilryggen. The boulder has been sampled as part of the MAGIC-DML project. Photo: Nat Lifton, January 2017.

Aberystwyth University glaciologist Professor Neil Glasser has posted his first blog from the East Antartic Ice Sheet where he’s part of an international study into the effects of climate change.

Professor Glasser left Wales on 7 January 2017 and is now working with scientists from Sweden, the USA and Norway  in an area known as Wasa in Dronning Maud Land.

Supported by the Swedish Polar Secretariat, the team will spend seven weeks collecting scientific data to reconstruct the long-term history of how the ice sheet in the area has thinned.

Writing on the project’s website, Professor Glasser describes how the first samples were gathered.

We have the first samples in the bag!

The MAGIC-DML team have been out on their first major trip from Wasa. We have been to a small nunatak called Fossilryggen about 50km across the ice from Wasa.  The trip was essentially to test out the vehicles and the vehicle storage and packing system that Calle and the others have developed, as well as to try out our camp and equipment set-up, but we were also able to take the opportunity to collect some samples from Fossilryggen, which was one of our target sites. We successfully set up a field camp and tested all the field and camping kit. We spent a long afternoon and evening on Fossilryggen while we were there and managed to get samples from three erratic boulders. Fossilryggen is made of volcanic rocks, shales and sandstones but dotted along the main ridge we found a number of rounded quartzite boulders that have clearly been dumped by the ice sheet when it was thicker at some time in the past. We know this because there is no quartzite bedrock on Fossilryggen. As such the only way for the quartzite to get there is to have been transported into the area from somewhere upstream and then dumped there by the ice. 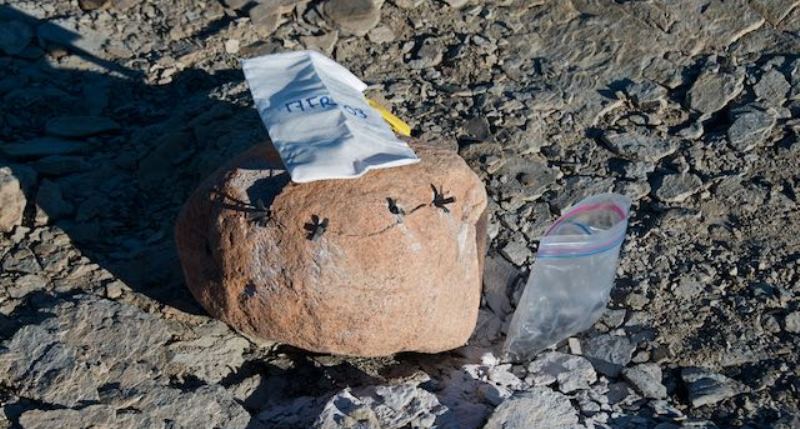 Close-up of quartzite boulder with the wedges in place. The wedges are hammered into the drilled holes to create a fracture. Photo: Nat Lifton, January 2017.

Sampling the boulders also gave us a chance to try out a new technique for getting the samples. The main methods for sampling boulders or bedrock made of hard rocks like quartzite are either to use a conventional hammer and chisel (hard work in the cold, takes a long time and often just creates lots of surface chips rather than a decent sample) or to attack the rock with a rock-saw or angle-grinder (much quicker but requires carrying heavy equipment and fuel so not practical for us in Antarctica). Our method is to use a heavy-duty portable battery-powered hammer drill to create a number of small holes in the rock and then to hammer splitting shims and wedges into the holes. As the wedges expand the shims in the holes, this splits the rock and the sample just pops off. The holes need to be drilled in the appropriate places in the sample but this technique seems to work really well. We only drilled five or six holes in each sample and that was enough, with the wedges, to pop off the perfect samples.  It is good that the method works so well as it is going to be our main method of sample collection.

So, overall a great trip out from Wasa. The first samples are in the bag and hopefully there will be many more to follow.

Read more about the MAGIC-DML project