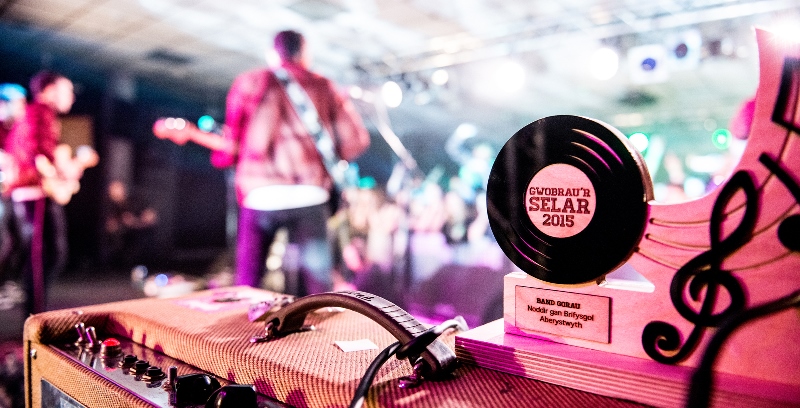 Aberystwyth University’s support for Welsh music and culture continues this month with sponsorship of the annual Welsh rock and pop awards Gwobrau’r Selar which take place at the University’s Students’ Union on Saturday 18 February 2017.

On the eve of the awards (Friday 17 February), the University’s Neuadd Pantycelyn will host an evening to celebrate a lifetime’s contribution by singer and poet Geraint Jarman.

In addition to being a major sponsor, Aberystwyth University is also sponsoring the event’s top award for Best Band.

The award for the best band will be presented by President of Undeb Myfyrwyr Cymraeg Aberystwyth Rhun Dafydd.

Dr Rhodri Llwyd Morgan, Pro Vice-Chancellor at Aberystwyth University, said: "Aberystwyth is a major focus for the Welsh rock scene and the University has been an invaluable crucible for nurturing Welsh talent over the years, with several bands going on to make outstanding contributions, including Mynediad am Ddim, Y Trwynau Coch and more recently The Odds. The sponsorship of Gwobrau’r Selar is a further indication of the University’s support for a vibrant Welsh music scene."

The University’s sponsorship of Gwobrau’r Selar is part of a wider package of practical support to foster new talent.

In January 2017, a weekend of music workshops was held for two local bands in Old College in conjunction with Cered, the Ceredigion Language Initiative.

Y Fflamau Gwyllt members are all pupils at Rhos Helyg Community Primary School, Bronant, and Casset who are originally from Llanerfyl in Montgomery and now students at Aberystwyth University.

Y Fflamau Gwyllt will also be playing a gig to mark Wales Music Day at the Black Lion in Aberystwyth at 6.30pm on Friday 10 February, 2017.

This Wales Music Day event is being organised by Cered with the support of Aberystwyth University and will include a panel discussion with the organizers of Ceredigion music festivals chaired by BBC Radio Cymru presenter Richard Rees at 7.15 pm, a Welsh music quiz at 8.30 and live music with RocCana at 9.45 pm.