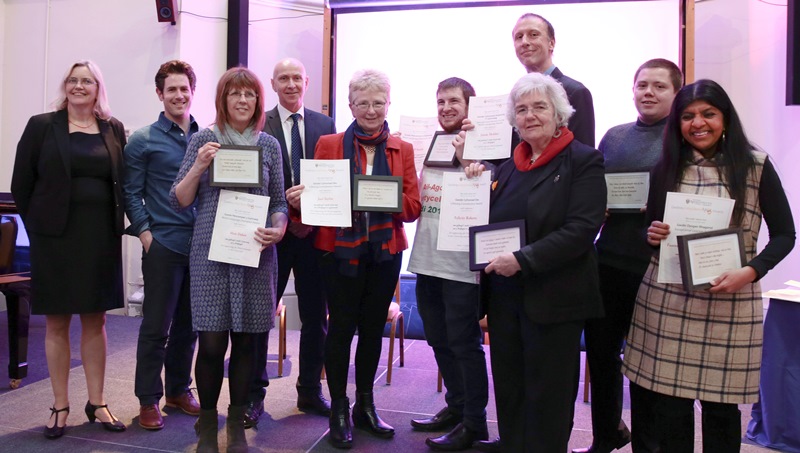 Seven individuals have been honoured by Aberystwyth University for their contribution to the Welsh language at a special ceremony in Old College tonight (Tuesday 7 March 2017).

The seven had been nominated by staff and students at the University before being chosen by a selection panel for the University’s first St David’s Day Awards.

The awards were presented by guest speak Ian Gwyn Hughes, Head of External Releations for the Football Association of Wales and a former student at Aberystwyth University.

Each of the seven winners received a personol poem (‘englyn’) written by Eurig Salisbury, an award-winning poet and novelist who is also a lecturer in the Department of Welsh and Celtic Studies at Aberystwyth University.

Announcing the winners, Ian Gwyn Hughes said: “It’s an honour to be back here in the Old Colege for the first time since I graduated from Aberystwyth University in 1981. This building at the College by the Sea is significant to our history and tradition as a nation. It is also important that establishments celebrate the Welsh language and culture - and my message to everyone who is learning is don't be afraid of using it."

Dr Rhodri Llwyd Morgan, Pro Vice-Chancellor with responsbility for the Welsh language at Aberystwyth University, said: “The aim of our St David’s Day awards is to highlight all the good work being done to foster and promote the Welsh language in the Univeristy – work which is often carried out quietly but which is rooted in commitment and passion. As an institution, we owe a debt of gratitude to those individuals who enrichen our bilingual culture and inspire others to embrace the language.” 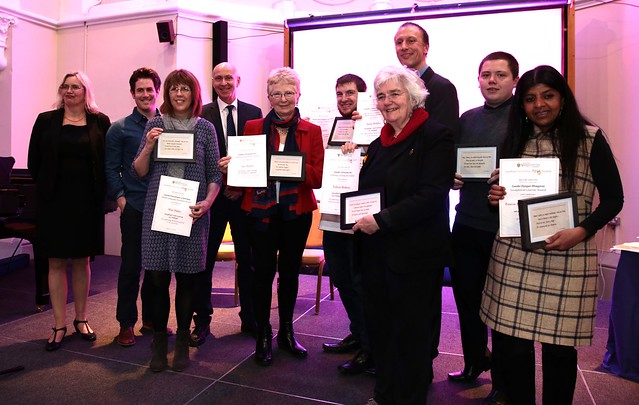 Felicity Roberts (Lifetime Contribution): Originally from Chwilog near Pwllheli, Felicity has been teaching Welsh for adults in Aberystwyth since 1968. She was one of the founders of CYD, which was set up in the 1980s to promote the use of Welsh between fluent speakers and learners. A lecturer in the Welsh Department at Aberystwyth University for 27 years, she was appointed Tutor Organiser at Aberystwyth University’s Welsh for Adults Centre in 2007.  She still tutors 12 hours a week and is the Coordinator of the Intensive Welsh Summer Course at Aberystwyth University, which runs throughout August and attracts people from all over the world.

Jaci Taylor (Lifetime Contribution): Born and raised in the Birmingham area, Jaci moved to Wales in 1974 and started letting Welsh after moving to Aberystwyth in 1980.  By 1984, she was a Welsh tutor herself working for the University and Ceredigion County Council. She was also responsible for organising and leading intensive courses at the College of Further Education Ceredigion. One of the joint founders of CYD in the mid-1980s, Jaci was appointed CYD Coordinator in 1996 and then Director. In 2007, she was appointed Development Officer at Aberystwyth University’s Welsh for Adults Centre where she remained until her retirement in January 2017.

Jamie Holder (Special Contribution): Jamie will be a familiar face to anyone who calling at the Aberystwyth Arts Centre cafe between 1992-2016. He used his Welsh without a second thought in his everyday work, and was always cheerful and welcoming. Even though Jamie has now left the Arts Centre, he hasn’t gone far and is now serving in the Pendinas restaurant at the National Library.

Faaeza Jasdanwalla-Williams (Exceptional Learner Award): Faaeza’s family are from Mumbai in India, and she now works part-time as a lecturer in the University’s Department of History as well as a Library Support Assistant in the Department of Information Services. In her determination to learn Welsh, Faazea has overcome several challenges including severely impaired sight. Her progression can be seen in her exam successes, and her efforts are clearly appreciated by the many staff who referred to Faaeza as an "inspiration" in putting her name forward for the award. Faaeza encourages her colleagues to follow in her steps and actively learn or practice their Welsh.

Mair Daker (Welsh Language Champion – Staff): Mary works in the Thomas Parry Library and has had a noticeable impact on the way University staff use Welsh. When corresponding by email with non-Welsh speaking staff members, she uses Welsh words and terms alongside an English translation. Mair also organises sessions for teaching basic Welsh terminology to library staff. She also seeks to encourage and support students to use the language.

Owen Howell (Welsh Medium Study Award): Owen grew up in Merthyr Tydfil. English was the language of the home and he did not attend a Welsh Medium school. He decided he wanted to change that after attending an Open Day at Aberystwyth University. He is now studying a joint honours degree in Welsh (Second Language) and Human Geography through the medium of Welsh.

Jeff Smith (Welsh Language Champion – Student): When he came to Aberystwyth University from his home in Kent, Jeff didn’t speak a word of Welsh. He chose to live in Pantycelyn and set about mastering the language, becoming an active campaigner for Plaid Cymru and the Welsh Language Society. Over the years, Jeff has held various officer posts with Aberystwyth’s Welsh-speaking students’ union UMCA and is fully committed to protecting the interests of the Union and the Welsh-speaking community within the University. He is also an elected member of Aberystwyth Town Council.