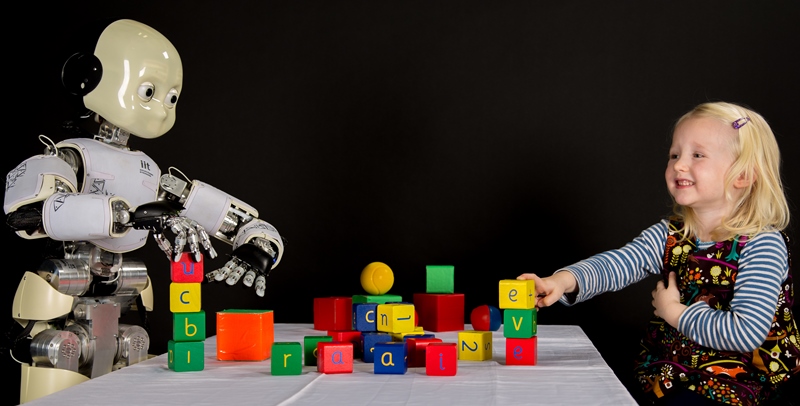 ‘iCub and Eve’: Four-year-old Eve and the iCub robot sit at a table full of colourful toys. Soon enough, they both turn them into meaningful stacks. Finishing earlier than iCub, Eve celebrates her achievement by putting a big smile on her face.

An image of a humanoid robot learning how to play from a young child has again caught the eye of the judging panel behind the Engineering and Physical Sciences Research Council (EPSRC) science photography competition.

‘iCub and Eve’ depicts four year old Eve and the iCub robot sitting at a table full of colourful toys.

Soon enough, they both turn them into meaningful stacks. Finishing earlier than iCub, Eve celebrates her achievement by putting a big smile on her face.

Taken by Sandy Spence and inspired by the research work of Dr Patricia Shaw and colleagues at the Department of Computer Science at Aberystwyth University, the image has been awarded third prize in the ‘People and Skills’ category.

It is also the third image in a series to be taken by the group to have triumphed in the EPSRC science photography competition.

In 2015 ‘The Greatest Discovery’ which showed the iCub humanoid robot ‘listening’ to the unborn child of mother to be Ayesha Jones, won the competition’s ‘People’ prize.

This was followed in 2016 by ‘iCub and the tutor’, which featured Ayesha’s one year old daughter Caiya sitting at a table and playing with the iCub robot. It also took the top award in the ‘People’ category.

In 2015 the Intelligent Robotics Group at Aberystwyth University was awarded £560,000 by the EPSRC for a three year research project that sees the group working with developmental psychologists to help robots learn more about the physics of objects and how to use objects as tools.

Patricia Shaw, a lecturer in Computer Science and a member of the Intelligent Robotics Group, explains: “During infancy, children learn from their experiences of the world around them. Through playing with objects they build up an understanding of what objects are and how to use them, along with concepts about the basic physics of the world such as object permanence.

“In this research, we are modelling how young infants learn and applying it to a humanoid robot. The aim is to develop a mechanism for robots to learn about the basic physics of the world through understanding objects. We are delighted to have had our work recognised by this competition for the third year in a row. It offers us a great opportunity to share with everyone what we are working to achieve.”

The winners of the EPSRC Science Photography Competition were announced on Monday 3 April 2017.

There were five categories in this year’s awards: ‘Eureka & Discovery’, ‘Innovation’, ‘People & Skills’, ‘Equipment & Facilities’ and ‘Weird and Wonderful’.

Over-all winner 'Graphene - IPA Ink' by James Macleod from the University of Cambridge, shows powdered graphite in alcohol, which produces a conductive ink.

Dr Helen Czerski she said: "Scientists and engineers are often so busy focusing on the technical details of their research that they can be blind to what everyone else sees first: the aesthetics of their work. Science is a part of our culture, and it can contribute in many different ways. This competition is a wonderful reminder of the emotional and artistic aspects of science, and it's great that EPSRC researchers have found this richness in their own work."

Congratulating the winners and entrants, Professor Tom Rodden, EPSRC's Deputy Chief Executive, said: "The quality of entries into our competition demonstrates that EPSRC-funded researchers are keen to show the world how beautiful and interesting science and engineering can be. I'd like to thank everyone who entered; judging was really difficult."

"These stunning images are a great way to engage the public with the research they fund, and inspire everyone to take an interest in science and engineering."

The competition received over 100 entries which were drawn from researchers in receipt of EPSRC funding.

The first, second and third prize winning images with descriptions are all available to download from the EPSRC website www.epsrc.ac.uk.