Research and robots on the prom 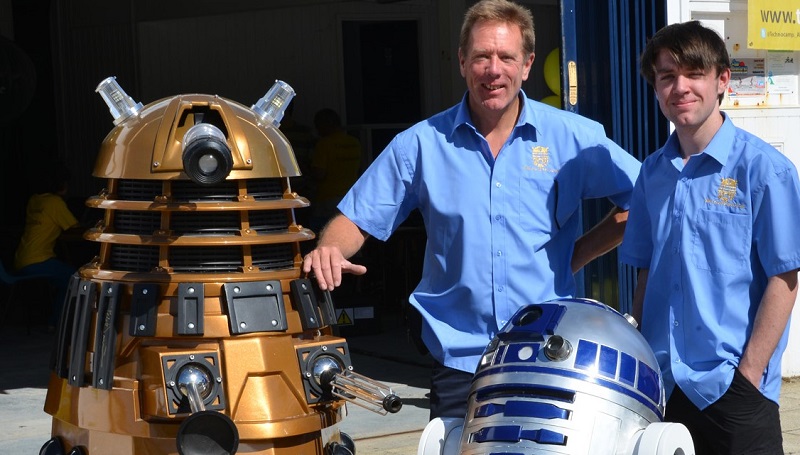 Stephen and Tomos from the Aberystwyth Robotics Club

Robots built by local schoolchildren at Aberystwyth University will be on display in the town’s Bandstand on Saturday 1 July 2017.

Visitors to this year’s Beach Lab will get a chance to see a range of interactive entertainment robots created by members of Aberystwyth Robotics Club.

And at Old College, there will be an opportunity to see and discuss some of the pioneering research being carried out by the University’s postgraduate students on robotics and other subjects.

Among the machines developed at the University’s award-winning club for 12-18 year old pupils from Penglais and Penweddig schools are:

Doris the Dalek will be patrolling the promenade during the day, along with a familiar collection of Droids inspired by characters from Star Wars including C-3PO, R2-D2 and BB-8. Infinity from Series 1 of the BBC’s Robot Wars will also be on display.

The event organiser is Stephen Fearn from the Institute of Mathematics, Physics and Computer Science (IMPACS) at Aberystwyth University.

“Members of the Aberystwyth Robotics Club come to the University Department every week to work on their different projects and Beach Lab at the Bandstand is a chance to showcase some of their amazing achievements,” said Mr Fearn.

“It’s also an opportunity for members of the public to find out more about the research on robotics which is carried out by the Department of Computer Science’s Intelligent Robotics Group and to try their hand at driving a robot themselves.”

The Beach Lab at the Bandstand is open between 10am and 4pm on Saturday 1 July and entry is free.

Members of the public can also stroll down the promenade to Old College to find out more about the University’s research on robotics and other areas.

More than 20 of the University’s postgraduate students will be displaying their research in a series of posters in the Quad between 11am-2pm on Saturday 1 July.

As well as robotics, some of the other fields of study include the ExoMars mission, the DNA of yeast, green energy, Alzheimer’s disease and the hippy movement in rural Wales 1968-1980.

Professor Reyer Zwiggelaar, Head of the Graduate School at Aberystwyth University, said: “This display of posters is an excellent opportunity for the public to get a glimpse of the range and depth of research being carried out in Aberystwyth, as well as put their questions directly to those carrying out this ground-breaking work.”