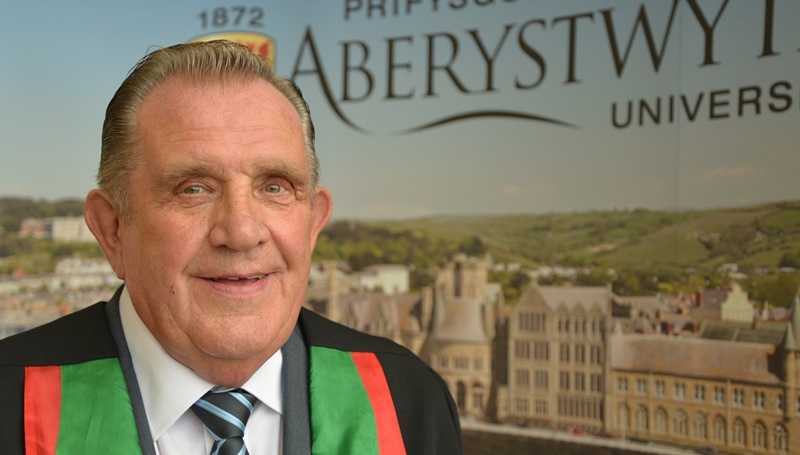 David Alun Jones, Vice President of the Football Association of Wales (FAW), has been presented with an Honorary Bachelor Degree in the Sciences by Aberystwyth University in recognition of his services to sport and the local community.

A retired librarian who worked at the National Library of Wales for 37 years, Dai Alun is also President of the Central Wales Football Association, and Chairman of the Ceredigion Ladies Football League.

He served as Chairman of the FAW Youth and Development Committee from 1998-2001 and represented the FAW at the 5th UEFA Youth Conference in Saint Petersburg, Russia, in 1999.

He was a Director of the League of Wales from 1995-1998 and 2003-04, and has been Referees Co-ordinator in the Wales International Soccer Tournament (Ian Rush Competition).

Dai Alun retired from the National Library of Wales in 2003. In addition to his footballing commitments, he is deacon and secretary of Morfa Chapel, Aberystwyth, and Chairman of Waunfawr Community Association.

Dai Alun was presented by Professor Rhys Jones, Head of the Department of Geography and Earth Sciences at Aberystwyth University on Wednesday 19 July 2017.

Treasurer, Pro Vice-Chancellor, prospective graduates and supporters. It is an honour and a privilege to present Dai Alun Jones for an Honorary Bachelor of Science Degree of Aberystwyth University.

Dai Alun Jones has made a significant contribution to a variety of community activities in Aberystwyth and the surrounding area, especially in relation to the Presbyterian Church, Waunfawr Community Association and football throughout the county at a number of levels. But Dai Alun has also contributed much on a national scale, having taken on major administrative roles with the Football Association of Wales. He was elected as a Vice President of the Association in 2012, just in time to witness, at first hand, Wales’ amazing run in the European Championships. I’m not sure how much credit, personally, he takes for the team’s achievements but he was there supporting them all the way!

Dai Alun Jones, in short, is someone who has made a significant and valuable contribution to religion and sport in his community, his county and his country. He has achieved all of this, while also being a loving husband to Jean, a caring father to Glesni and Nerys and a doting grandfather to five grandchildren.

Treasurer, it is my absolute pleasure to present Dai Alun Jones to you for an Honorary Bachelor of Science Degree.