New edition of the Second Branch of the Mabinogi published 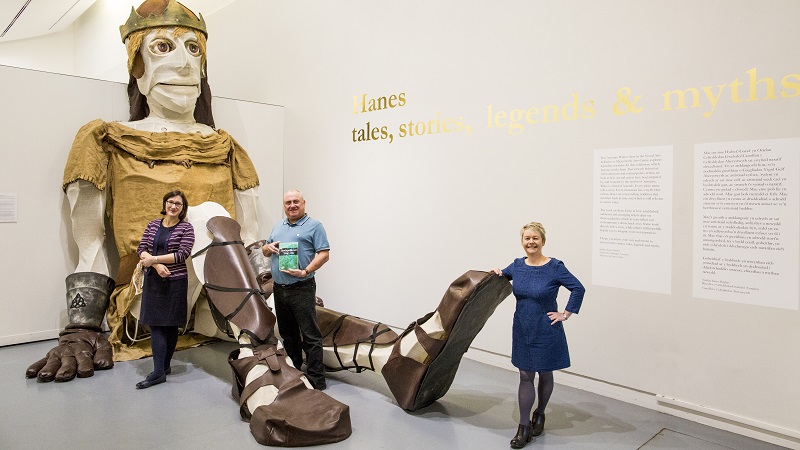 Dr Ian Hughes (Centre), editor of the new volume Bendigeiduran Uab Llyr; Dr Cathryn Charnell-White (Left), Head of the Department of Welsh and Celtic Studies at Aberystwyth University and Delyth Ifan, Director of Education Resource Publishers (CAA) with a huge puppet of Bendigeidfran by Small World Theatr, Cardigan, which is part of an exhibition at the Aberystwyth Arts Centre until 16 January 2018.

The first new edition of the Second Branch of the Mabinogi to appear for 80 years has been published by Aberystwyth University.

Bendigeiduran Uab Llyr (Bendigeiduran Son of Llyr) was published in November 2017 by Education Resource Publishers (CAA), which is part of the University.

The volume editor is Dr Ian Hughes, Senior Emeritus Lecturer in the Department of Welsh and Celtic Studies at Aberystwyth University.

Dr Hughes said: “Since the middle of the nineteenth century the Second Branch of the Mabinogi has generally been known as Branwen Uerch Lyr. However, I have decided to restore the earlier title Bendigeiduran Uab Llyr.

“The other three branches are named after the first character mentioned in them and the realm over which he rules: Pwyll is Lord of Dyfed, Manawydan becomes Lord of Dyfed, and Math is Lord of Gwynedd. Accordingly, I have named the Second Branch after Bendigeidfran who is King of Britain.”

This is the first edition of the Second Branch of the Mabinogi in Welsh since the pioneering volume by Ifor Williams, Pedeir Keinc y Mabinogi, was published over eighty years ago.

Education Resource Centre (CAA) Director, Delyth Ifan, said: “This is an important publication that introduces these already familiar myths to a contemporary audience. It contains a comprehensive preface that sets the Branch in its context and tracks the origins of the main characters. It uses the text from Llyfr Gwyn Rhydderch (The White Book of Rhydderch), together with various readings from Llyfr Coch Hergest (the Red Book of Hergest) and the verse featured in the Peniarth 6 manuscript.”

To mark the launch, a special workshop was organised at Ysgol Gyfun Penweddig in Aberystwyth on Monday 13 November 2017 for pupils studying A Level Welsh in local schools.

As part of the event, the students were given a presentation to the legend of 'Branwen Ferch Llyr' by the editor of the volume, Dr Ian Hughes, who also led a discussion on the topic.

Dr Cathryn Charnell-White, Head of the Department of Welsh and Celtic Studies at Aberystwyth University said: “Departmental staff enjoy working with schools, not only to share knowledge about our subject, but also to add variety to pupils' literary experiences and to support teachers in their work. This new edition will be a valuable asset for students studying Welsh at A level as well as students who follow degree modules on the Four Branches.”

Bendigeiduran Uab Llyr is available to buy for £10 from the CAA website: www.aber.ac.uk/caa.