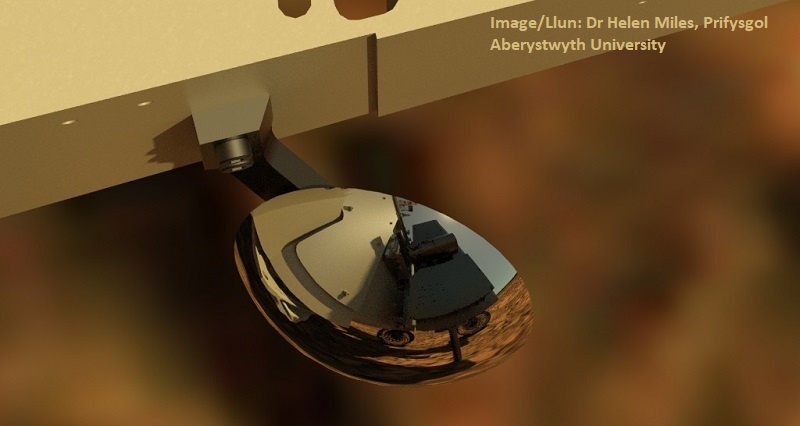 The Rover Inspection Mirror (RIM), as seen from the High Resolution Camera (HRC). When the drill is collecting a sample, the RIM allows PanCam to see underneath the drill box - in this image the rover is in the process of drilling to collect a sample of Martian rock.

Computer generated visualizations of the ExoMars Rover due for launch in 2020 are proving invaluable as scientists prepare to build the mission’s research vehicle.

Images and an interactive virtual reality model have been developed by Dr Helen Miles, a computer scientist at Aberystwyth University.

The work by Dr Miles is assisting the rover’s designers to predict what the mission’s camera system will be able to see once it is up and running on the red planet.

An advanced panoramic camera, PanCam is able to capture highly detailed 3D models of rocks on Mars as scientists search for signs of life.

From its high vantage point above the rover, PanCam will also be used to help mission planners navigate the surface of Mars.

Combined with the mission’s Rover Inspection Mirror, PanCam will also be able to see parts of the rover which would otherwise be hidden, such as the drilling operations.

Two of the items are crucial to the in-situ calibration of PanCam to ensure accurate results: a calibration target for colours and fiducial markers for geometry.

Dr Miles has developed a virtual environment to inspect the rover and generate simulated images from PanCam that can predict with a high degree of accuracy which parts of the rover are visible.

With these images, Dr Gunn is able to work with the international PanCam science team to make sure all of the hardware will be placed in the best locations on the rover, and start planning how they will be used during the mission. 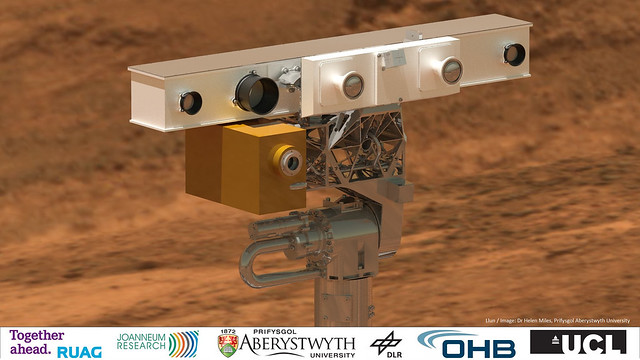 Dr Miles teaches modules in Applied Graphics and Computer Graphics and Games at the Department of Computer Sciences at Aberystwyth University and specialises in the use of virtual reality for teaching and learning.

“It is really important that scientists know what the rover will be able to see via PanCam”, said Dr Miles.

“As the complete and final version of the rover has yet to be built, the virtual model we are using to generate images at Aberystwyth makes it possible to check what is visible and avoid potential problems at this early stage, rather than encountering them when the rover has been deployed on Mars.”

Aberystwyth University’s contributions to the ExoMars rover mission, including images produced by Dr Miles are highlighted in a new website: http://exomars.wales/

The website features a history of the hardware design and development, along with information about the projects in which the Aberystwyth team are involved.

Aberystwyth University are a part of the PanCam team, led by Professor Andrew Coates of UCL’s Mullard Space Science Laboratory and involves a number of international collaborators.

The Aberystwyth University and UCL work on the ExoMars panoramic camera system, PanCam, is funded by the UK Space Agency.

Institute of Mathematics, Physics and Computer