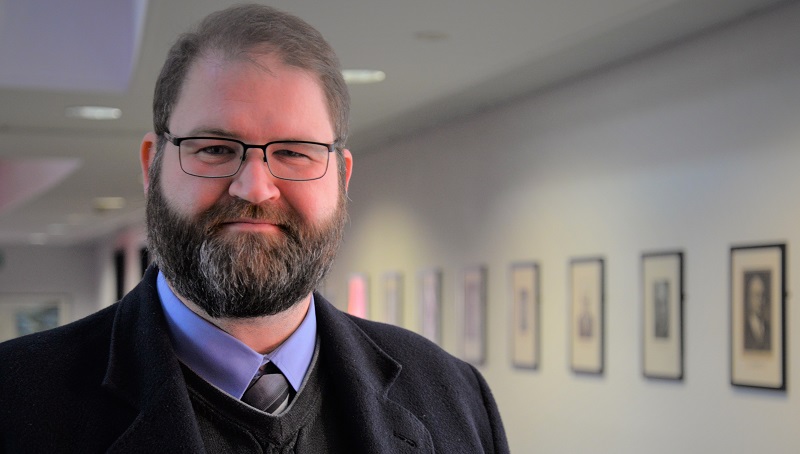 Dr Warren Dockter, author of Churchill and the Islamic World: Orientalism, Empire and Diplomacy in the Middle East and editor of Winston Churchill at the Telegraph.

Winston Churchill had a short affair with the dazzling socialite Lady Doris Castlerosse in the 1930s, according to his former private secretary, research has found.

A recording by Churchill’s former private secretary, Jock Colville, in which he disclosed that Britain’s war leader had engaged in a short affair with the society beauty in the South of France, has been revealed by Dr Warren Dockter of Aberystwyth University and Professor Richard Toye, Head of History at the University of Exeter.

Colville, a close confidant and trusted aide of Churchill, said in the taped 1985 interview for Churchill College, Cambridge, that the story that he had to tell was rather scandalous and that he did not want it disclosed for a long time to come.

He revealed that when he visited Winston and his wife Clementine in the late 1950s, Churchill’s literary assistant Denis Kelly had presented Clementine with a set of love-letters from Lady Castlerosse. Clementine Churchill, he recounted, read the correspondence and turned pale.

According to Colville, Clementine was anxious about the episode for months and told him she had never previously thought that Winston had been unfaithful to her.

The research, to be published in the journal in the Journal of Contemporary History - and featured in the Channel 4 documentary Secret History– includes testimony from Castlerosse’s niece, Caroline Delevingne, who disclosed that her family had known about the affair.

Documents in the family’s possession include - in addition to photos of Churchill and Lady Castlerosse together - a long and affectionate 1934 letter in which he compared her to a ray of sunshine.

Churchill apparently carried out the affair in the 1930s when he had four holidays in the south of France he took unaccompanied by his wife Clementine. He painted at least two portraits of the renowned society beauty – which were removed by Churchill’s friend the Press Baron, Lord Beaverbrook, after her death from an overdose of sleeping pills at the Dorchester Hotel in 1942.

From an ordinary suburban upbringing in Beckenham, South East London, Doris, Viscountess Castlerosse, became a notorious society figure, with a string of wealthy lovers.  Tall, blonde and vivacious, she is said to have been the model for the fast young widow Iris Storm in Michael Arlen’s The Green Hat and, later, for the tempestuous temptress Amanda in Noel Coward’s Private Lives.

She married Valentine Castlerosse, a spend-thrift Viscount and gossip columnist, but they divorced after he apparently hired private eyes to follow his wife and report on her infidelities.

The research also cites papers of President Roosevelt’s right-hand man Harry Hopkins which show that at the height of World War 2, Churchill pulled strings to get Doris a hard-to-obtain airplane passage so that she could travel back to Britain from America.

Dr Warren Dockter is a Lecturer in the Department of International Politics at Aberystwyth University. He is the author of Churchill and the Islamic World: Orientalism, Empire and Diplomacy in the Middle East and editor of Winston Churchill at the Telegraph.

Dr Dockter said: “This revelation about Churchill's private life helps us locate the man inside the myth and reveals a more complete and nuanced understanding of his character. Beyond his relationship with Doris Castlerosse, the academic article for the Journal of Contemporary History further illuminates how Churchillian networks have curated Churchill's memory.”

Professor Richard Toye, who has written three books on Churchill, said the research provided a fuller picture of a little-known episode in Churchill’s life, and shed new light on his character.

“Although this doesn’t radically change our view of Churchill as a leader, it does give us a more complete view of his character and his marriage. The received wisdom is that he never strayed and that he and Clementine were devoted to one another. In fact, Clementine loathed the Riviera Set with whom he liked to spend his summers, and saw them as a bad influence on him.”

Professor Richard Toye is Head of History at Exeter University and author of three books on Winston Churchill, most recently The Roar of the Lion: The Untold Story of Churchill’s World War II Speeches.

Churchill’s Secret Affair will be broadcast on Channel 4 on Sunday 4 March at 8pm London time.