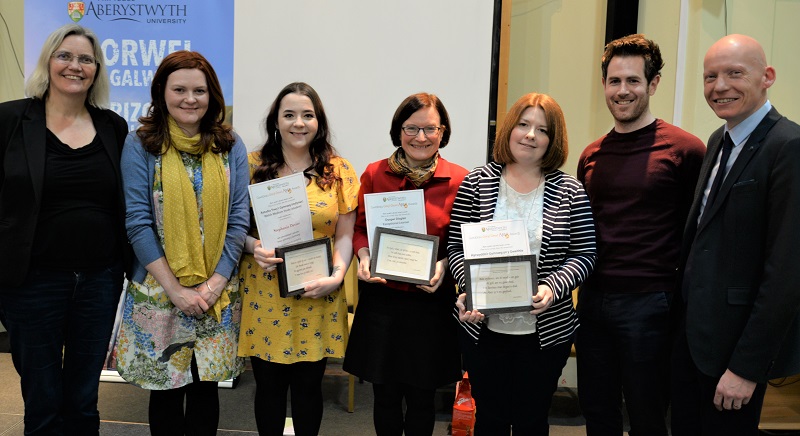 Four individuals have been honoured by Aberystwyth University for their contribution to the Welsh language at a special ceremony in the Old College on Friday 16 March 2018.

The 2018 Aberystwyth University Gŵyl Dewi Awards were presented to Lucy Hodson, Branwen Davies, Stephanie Davies and Delyn Fritter who were nominated for the award by staff and students at the University.

The winners include learners and first language Welsh speakers, students and staff, from four different categories:

Each of the winners received a personal poem (‘englyn’) written by award winning poet and novelist Eurig Salisbury, who is also a lecturer in the Department of Welsh and Celtic Studies at Aberystwyth University.

Congratulating the winners, Dr Rhodri Llwyd Morgan, Pro Vice-Chancellor, with responsibility for the Welsh Language and Culture and External Engagement, said: “I am delighted that we celebrate the contribution of students and colleagues to the Welsh language at these Awards. We celebrate the individual’s achievements, but it is also an occasion where the University expresses an appreciation to everyone that makes an exceptional effort on a daily basis to promote and support others to use the language in their work and studies. Without doubt the special vitality of the Welsh speaking community in the University is something we are very proud of and eager to continue to support.”

Lucy Hodson (Exceptional Learner): Originally from Gloucestershire, Lucy joined Aberystwyth in 2012 following her appointment as the University’s Director of Planning. During the past two years, Lucy has devoted her spare time to learn Welsh language and has completed the Entry level Learning Welsh course and exam. The key elements that persuaded Lucy to learn the language was that she lived in Wales and wanted to keep the language alive.

Branwen Davies (Promoting Welsh in the Workplace): Branwen has worked for the University for 10 years and has contributed to the Welsh language through her work. Branwen is a Publications Officer and is a part of the University’s Creative Media team. she encourages her non-Welsh speaking colleagues to use the language, by using Welsh words and terms alongside a translation when communicating by phone or email, as well as introducing ‘Word of the Week’ in the office which explains the meaning and gives pronunciation.

Stephanie Davies (Welsh Medium Study): Steph is a third year student studying Drama and Theatre Studies. Originally from Caerphilly, she is the only member of her family that speaks Welsh. She learned the language through attending Welsh-medium schools, but decided to attend an English-medium six form school which decreased her use of the Welsh language substantially. The main reason for choosing Aberystwyth University was to reinforce her relationship with the language, as well as the opportunities to study through the medium of Welsh.

Delyn Fritter (Welsh Language Champion): Originally from a bilingual home in Pontypool, Delyn is a second year International Politics student. Her decision to study at Aberystwyth University was based on the opportunities to study the subject in Welsh and the Welsh language. The various opportunities that have arisen because of the Welsh language has led to her election as the Welsh Affairs Officer in the International Politics Association Committee. She offers Welsh lessons weekly to the non-Welsh speaking members of the society.