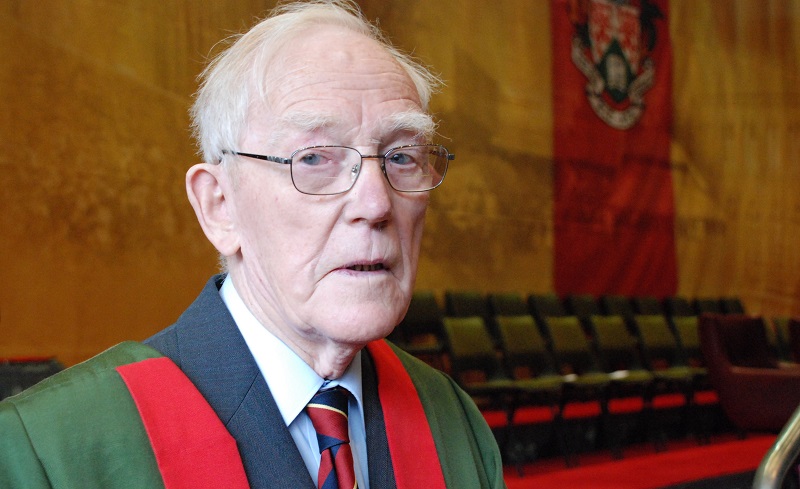 Professor Ieuan Gwynedd Jones (1920-2018) was presented as Fellow of Aberystwyth University in 2010.

Former head of the Department of Welsh History and Fellow of Aberystwyth University Professor Ieuan Gwynedd Jones has died at the age of 97.

A native of the Rhondda Valleys, Professor Jones was appointed Sir John Williams Chair of Welsh History at Aberystwyth University in 1969. During this time as head of the Department of Welsh History he developed his work on nineteenth-century Wales. His main studies are brought together in three books: Explorations and Explanations (1981), Communities (1987) and Mid-Victorian Wales: the Observers and the Observed (1992), for which he was awarded the degree of D.Litt by the University of Wales. Professor Jones retired in 1984 and was made a Fellow of Aberystwyth University in 2010.

Here Professor Paul O’Leary, the current incumbent of the Sir John Williams Chair at the Department of History and Welsh History, pays tribute to Professor Jones.

Professor Jones held the Sir John Williams Chair of Welsh History and was a Fellow of the University. A distinguished historian of Victorian Wales, as well as being an expert in the parliamentary history of the seventeenth century, his most important and influential works dealt with the political and social history of the nineteenth century. A consummate essayist and stylist, his main studies are brought together in three books: Explorations and Explanations (1981), Communities (1987) and Mid-Victorian Wales: the Observers and the Observed (1992), for which he was awarded the degree of D.Litt by the University of Wales.

His path to a successful career in academia was unconventional. The son of a coalminer and a nurse in the Rhondda Valleys, he attended grammar school at Bridgend. After leaving school at the age of fourteen he joined the merchant navy, which he left because of illness, and during the Second World War he worked as a signalman on the railways.

Soon after the war, he entered university at Swansea, graduating with a First in English in 1948. His MA thesis was a trenchant study of history writing in early modern England that won him a research fellowship at Peterhouse College, Cambridge. By 1954 he had returned to a fellowship in Swansea and changed direction from early modern parliamentary history to the social and political history of Wales in the nineteenth century. This was the field he would make unmistakably his own. In 1957 he was appointed to a lectureship. He joined a department that was developing the study of Welsh history in new and exciting ways, and his colleagues included his close friend Sir Glanmor Williams and Kenneth O. Morgan (now Lord Morgan, and later Principal at Aberystwyth). Professor Jones was a leading member of a group of historians in the 1960s that began to write history ‘from below’, the influence of which still pervades both history and politics in 21st century Wales, and beyond.

In 1969 he was appointed to the Sir John Williams Chair at Aberystwyth and he remained in that post until his retirement in 1984. Here he developed his work on nineteenth-century Wales as head of what was then the Department of Welsh History. He was a superlative teacher who engaged his students’ interest through the passion he displayed in his subject and his conviction that understanding the dynamics of political and cultural developments in Victorian society was essential for achieving a proper understanding of the development of modern Wales.

As the most influential postgraduate supervisor of research on the history of Wales during the twentieth century, Professor Jones developed the careers of successive generations of researchers, both at Swansea and Aberystwyth. Here at Aberystwyth he was instrumental in achieving recognition from the Social Science Research Council (subsequently the ESRC) for funding Masters research in the social and economic history of Wales in the Department of Welsh History. A quota of SSRC/ESRC PhD studentships was also allocated to the department during his time. These sources of funding allowed the department to develop a strong postgraduate research culture. He cooperated with scholars in other departments and was a strong supporter of the interdisciplinary work of the Centre for Advanced Welsh and Celtic Studies.

As an exponent of ‘history from below’, Prof. Jones put the people at the heart of his depiction of Victorian society. He was a founder member of Llafur: the Society for the Study of Welsh Labour History (later the Welsh People’s History Society) in 1970 and he was the society’s president until his death. He was also a keen supporter of county history societies, which he viewed as important institutions for engaging a wider public in the study of history.

When he was awarded a University Fellowship by Aberystwyth in 2010, shortly after his 90th birthday, the citation noted that his prose style was ‘erudite and hard-hitting, while at the same time being elegant, compelling and with an enviable lightness of touch’. He wore his deep erudition and wide cultural knowledge lightly.