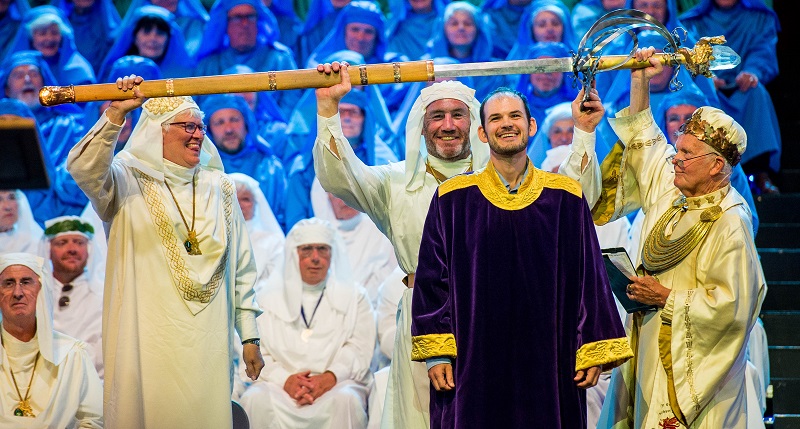 The chairing of Aberystwyth alumnus Gruffudd Eifion Owen at the Cardiff National Eisteddfod.

For the second year running, a former Aberystwyth student has won the chair at the National Eisteddfod.

Gruffudd Eifion Owen was chaired at the final main ceremony of the Cardiff National Eisteddfod on Friday 10 August 2018.

The Chair was awarded to Gruffudd, who presented his work under his nom-de-plume ‘Hal Robson-Kanu’, for his work on the theme of ‘Porth’ (Gateway or Entrance).

This was the second time an Aberystwyth University alumni won one of the main awards at the Cardiff Eisteddfod after Catrin Dafydd won the Crown earlier in the week.

The chair ceremony culminated a successful week for Gruffudd as he won Monday evening’s Siwper Stomp which was held on the Pavilion Stage, and the main prize at the Stomp Werin in Tŷ Gwerin on the Thursday.

Originally from Pwllheli, Gruffudd graduated from the Department of Welsh and Celtic Studies in 2007, before completing his MPhil Degree in Aberystwyth in 2011.

He now works as an editor on the popular BBC Cymru soap, Pobol y Cwm, where he works with Catrin Dafydd who graduated from Aberystwyth’s Department of Welsh in 2003.

Eurig Salisbury, interim Head of the Department of Welsh and Celtic Studies, said: “It’s a pleasure to congratulate one of our former students, who once described himself ‘strutting down Rhiw Penglais’ with his friends, ‘our scarfs like our ideas fluttering in the wind’. Safe to say Gruffudd can now strut his stuff down the broad streets of Cardiff too! The department and all its staff are extremely proud of his great achievement.”

The adjudicators for the Chair this year were Ceri Wyn Jones, Emyr Davies and Rhys Iorwerth.

Delivering the adjudication on the work of ‘Hal Robson-Kanu’ on behalf of his fellow judges, Ceri Wyn Jones said: “This poem took our breath away – not because it’s refined or rich, not because it’s extremely elaborate and multi-layered – but because it is so trenchant in the way it deals with experiences which are a way of life for the digital generation.  And by doing this, he studies the way in which we choose to live our lives, and that meaning – or lack of meaning – has worried poets for generations of course.

“But his greatest triumph may be the fact he has done this in such an accessible way, thanks to his fast-moving colloquial style and a wide range of keys, where brand names and swear words are as natural and common to him as strict metre poems.  And as writing poetry comes so easily to him, he hits the target every time, changing his style without affecting the story.”

Published in 2015 by Barddas, his first collection of poems, Hel Llus yn y Glaw, reached the shortlist in the poetry category of the Welsh Book of the Year competition in 2016.

Cardiff’s National Eisteddfod Chair was sponsored by National Museum Wales to celebrate the 70th anniversary of St Fagans National Museum of History. The financial prize was donated by Gaynor and John Walter Jones in memory of their daughter, Beca.