A degree that just might get you to Mars 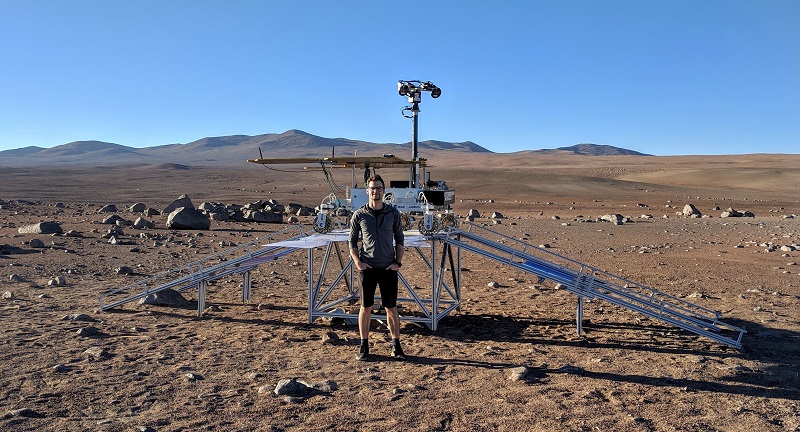 An opportunity to work on the 2020 European Space Agency (ESA) / Roscosmos mission to Mars has taken an Aberystwyth University student a step closer to a career in the space industry.

Ariel Ladegaard from Bergen in Norway has just returned from the Atacama Desert in Chile where he has been taking part in an ESA field trial of a test rover, as scientists prepare to go in search of life on the red planet.

As an undergraduate student on the Space Science and Robotics degree programme at Aberystwyth, Ariel was invited by computer science lecturer Dr Helen Miles to look at how images sent back from Mars could be corrected to reflect the planet’s true colours.

Tasked with capturing stereo and 3D images of the Martian terrain, work on PanCam is led by the Mullard Space Science Laboratory at University College London.

At Aberystwyth, Dr Gunn and his team have developed a hardware emulator for PanCam and a unique colour swatch inspired by the stained glass windows of medieval churches to ensure it accurately captures colours on the sun-blanched planet.

Images taken during the mission will be studied by geologists as they look for minerals that might indicate the presence of water and the building blocks of life.

For his final year undergraduate project in 2018, Ariel was set the challenge of developing a prototype software package that could compensate for imperfections in the mission’s camera, and the wear and tear of working in Mars’ hostile environment.

“Driving around on Mars is challenging and time consuming, so you want to be certain that you’re going in the right direction. Images taken from a distance will be analysed to look for possible sites where the rover can use its ground penetrating radar and drill, so they need to be as accurate as possible.

“Once back on Earth the images will be processed by a radiometric correction pipeline which automatically adjusts them based on our knowledge of how the images were taken and how the camera responds to light in various conditions.”

Ariel’s undergraduate project focused on developing a proof of concept framework for the correction pipeline, and drew on work done on the ground software for NASA’s James Webb Space Telescope.

Now a PhD student at Aberystwyth, Ariel is working on the next phase and developing the algorithms that go into correcting the images.

Ariel said: “Aberystwyth has been great. It is everything I could have hoped for from an education in terms of how quickly I have been able to get involved in something meaningful to me, a real project. My goal is to work in robotic space exploration, a niche industry that can be difficult to enter but Aberystwyth has certainly opened the door for me.”

Speaking of his work on ExoMars, Ariel added: “It has been very nice to see just how open people in the ExoMars community have been to new actors coming in with questions and their own ideas and views on things. At first I was a bit overwhelmed by the mission itself as it has been going on for a long time. There’s quite a barrier to entry for new people in understanding just how everything fits together, not just on a technical level, but also on the social and political levels. The more I have delved into that however, the more I’m confident I have something to offer to the project.”

As well as developing image processing software, Ariel has been involved with ExoFiT, ESA’s Airbus-led field trials using an ExoMars-like prototype rover in Spain and Chile.

Working near the Paranal Observatory high up in the Atacama Desert in February 2019, he was part of the team testing the mission’s procedures and approaches to gathering science.

It was also an opportunity to put the image processing pipeline to the test, with pictures sent back to the UK for correction.

Ariel added: “Aberystwyth’s involvement with ExoMars revolves around calibration of the mission’s camera system and correction of images – understanding how the cameras work and how we can process and interpret the images. It was good to be able to put some of the work we have being doing in Aber to the test in Chile and gather valuable test data.”

Before taking up his studies at Aberystwyth, Ariel was a student at the Norwegian Centre for Space-related Education near Andenes in northern Norway.

He worked for seven years in the television and film industry before returning to higher education as a mature student on the BSc Space Science and Robotics degree at Aberystwyth University’s Department of Computer Science.