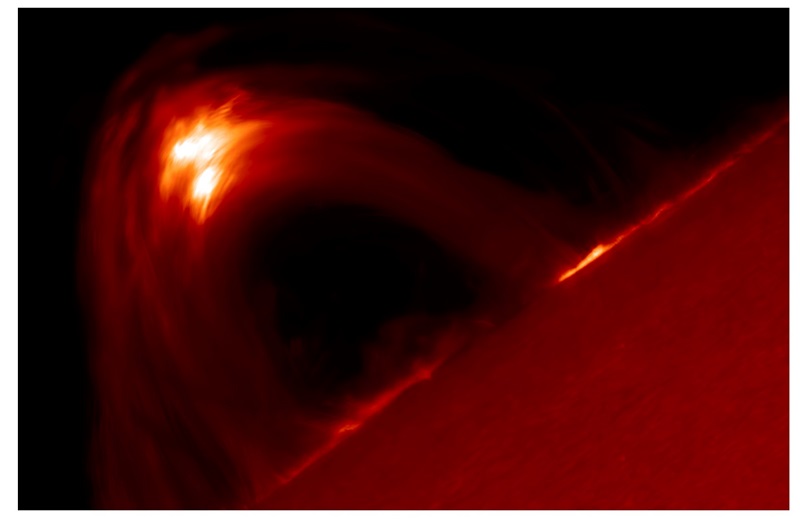 An image taken by the Swedish Solar Telescope of the coronal magnetic loops during the strong solar flare on September 10, 2017. The hight of the loop arcade is about 25,000km, twice the diameter of Earth.

Dr David Kuridze from the Solar Physics Group at the University’s Department of Physics is a leading authority on the use of ground-based telescopes to study the Sun’s corona, the ring of bright light visible during a total eclipse.

Working from the Swedish 1-m Solar Telescope at Roque de los Muchachos Observatory, La Palma in the Canary Islands, Dr Kuridze studied a particularly strong solar flare which erupted near the surface of the Sun on 10 September 2017.

Writing in the journal Astrophysical Journal, Dr Kuridze reports on how a combination of favourable conditions and an element of luck enabled the team to determine the strength of the flare’s magnetic field with unprecedented accuracy.

Dr Kuridze believes the findings have the potential to change our understanding of the processes that happen in the Sun’s immediate atmosphere.

“Everything that happens in the Sun’s atmosphere is dominated by the magnetic field, but we have very few measurements of its strength and spatial characteristics”, Dr Kuridze said.

“These are critical parameters, the most important for the physics of the solar corona. It is a little like trying to understand the Earth’s climate without being able to measure its temperature at various geographical locations.”

“This is the first time we have been able to measure the magnetic field of the coronal loops, the building blocks of the Sun’s magnetic corona, with such a level of accuracy”, Dr Kuridze added. 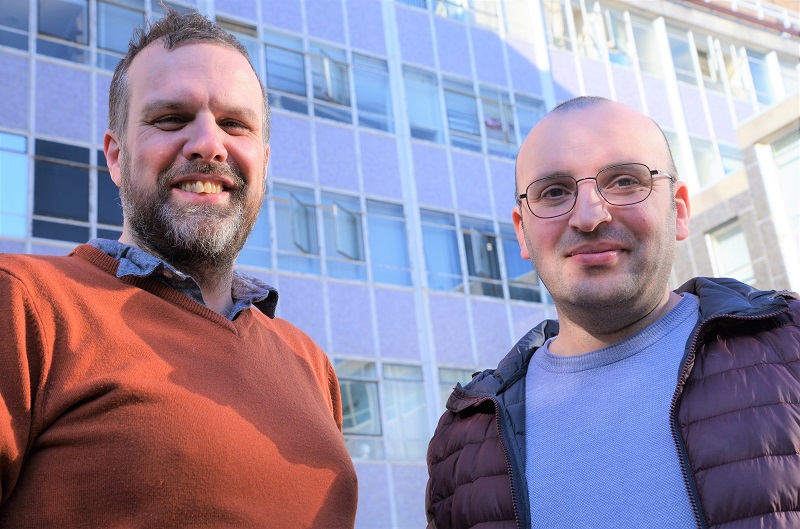 Solar flares appear as bright flashes and occur when magnetic energy that has built up in the solar atmosphere is suddenly released.

Until now, successful measurement of the magnetic field has been hindered by the weakness of the signal from the Sun’s atmosphere that reaches Earth and caries information about the magnetic field, and limitations in the instrumentation available.

The magnetic fields reported in this study are similar to those of a typical fridge magnet and around 100 times weaker than the magnetic field encountered in an MRI scanner.

However, they are still responsible for the confinement of the solar plasma, which make up solar flares, as far as 20,000 km above the Sun’s surface.

Over a 10-day period in September 2017, Dr Kuridze used the telescope to study an active area on the Sun’s surface which the team knew to be particularly volatile.

However, the telescope can only focus on 1% of the Sun’s surface at any given time. As luck would have it, Dr Kuridze was focused on exactly the right area and at the right time when the solar flare erupted.

These solar flares can lead to storms which, if they hit Earth, form the northern lights – the Aurora Borealis.

They can also disrupt communications satellites and GPS systems, as proved to be the case on this occasion in September 2017.

Furthermore, the altitude of flights over the polar-regions was restricted due to higher than normal radiation levels.

Dr Kuridze
Originally from Tbilisi in Georgia, Dr David Kuridze is a Sêr Cymru Fellow at the Department of Physics at Aberystwyth University.

Dr Kuridze is the lead author on Mapping the Magnetic Field of Flare Coronal Loops, which is published in the Astrophysical Journal, which also features Dr Huw Morgan, Reader at the Department of Physics at Aberystwyth University as co-author.

This work was initiated when Dr Kuridze was based at Queen’s University Belfast and was completed when he moved to Aberystwyth University in 2017.