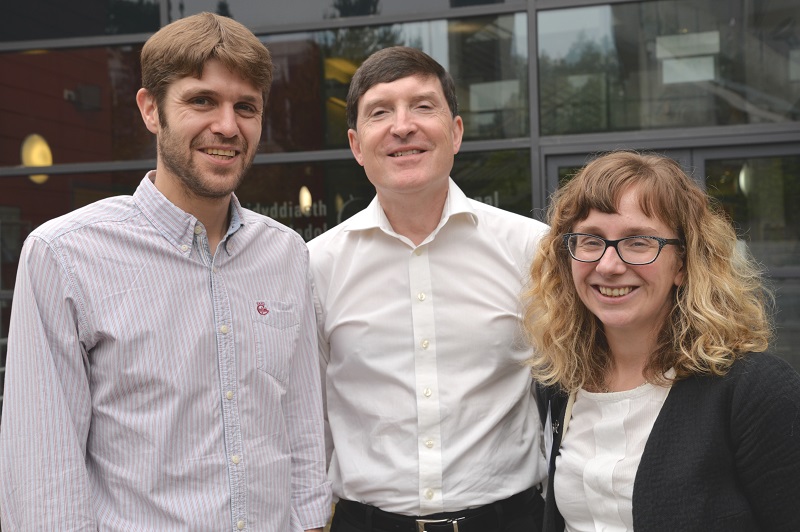 Dr Huw Lewis, Professor Wilson McLeod and Dr Elin Royles have been collaborating on the Revitalise project for the past two years.

Academics from Aberystwyth and Edinburgh universities will present recommendations from a two-year research network project on minority language promotion in Brussels on Wednesday 10 April 2019.

Funded by the Arts & Humanities Research Council, the Revitalise project has been led by Dr Huw Lewis and Dr Elin Royles from the Department of International Politics at Aberystwyth University, and Professor Wilson McLeod from the School of Celtic and Scottish Studies at the University of Edinburgh.

Since launching Revitalise in April 2017, the researchers have organised a series of workshops involving more than 50 leading language policy practitioners, academics and civic society organisations from across Europe and North America.

Their investigations have focused on how language revitalisation efforts should be designed and implemented in the light of contemporary social, economic and political changes.

Dr Huw Lewis of Aberystwyth University said: “Over recent decades we have witnessed a series of transformational social changes, many of them relating to areas of life that are deemed central to the vitality of minority languages – for example, family, community, economy and the nature of government. The aim of the Revitalise project has been to challenge accepted approaches and provide policy practitioners with recommendations that can be used to shape and inform language revitalisation efforts in today’s increasingly global age.”

Dr Elin Royles of Aberystwyth University said: “Today, people live increasingly mobile lives that span ever-wider geographic areas. Such trends impact upon how people interact with each other from day-to-day, and, therefore, should influence how interventions that aim to promote greater social use of regional or minority languages are conceived and implemented. Interventions should give greater recognition to the existence of different forms of language communities – geographical communities, communities of interest, online communities etc. – and increase the emphasis on interventions that recognise the more networked nature of contemporary social life.

Professor Wilson McLeod of Edinburgh University said: “Over recent decades, governments – usually sub-state governments – have emerged as increasingly influential actors in many European language revitalisation efforts, but this trend may have implications for the relative balance between the role of governmental actors and the essential work of civil society organisations. Consequently, there is a need to reflect critically on the types of activities associated with language revitalisation that governmental institutions are in the best position to administer, and the ones where activity by civil society is more appropriate and effective.”

The recommendations of the Revitalise research network will be presented to a special conference in Brussels bringing together government representatives from the Basque Country, the Balearic Islands, Catalonia, Greenland, Hungary, Ireland, Navarre, Valencia and Wales as well as officials from the European Commission and the Council of Europe.

The one-day conference has been organised in collaboration with the Network to Promote Linguistic Diversity, a European network working in the field of language policy and facilitating best practice.

For further details about the new research findings, see the Revitalise website: http://revitalise.aber.ac.uk.