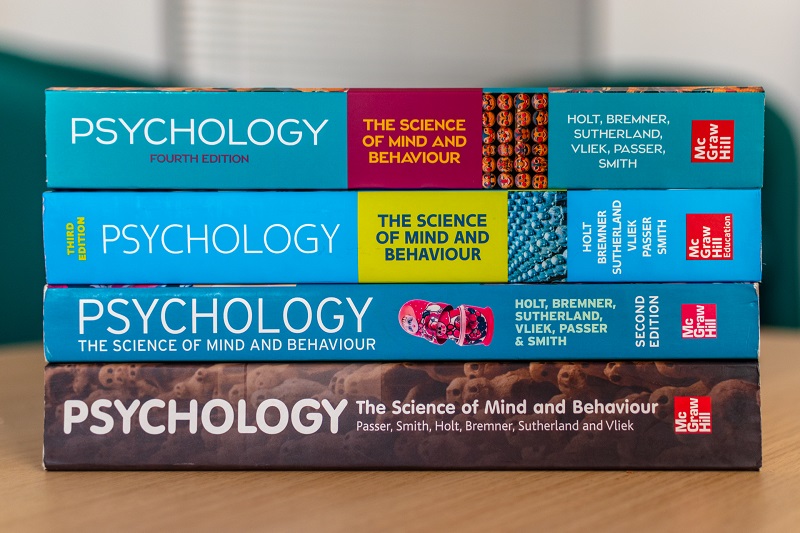 Psychology: The Science of Mind and Behaviour: the transition from the first edition to the fourth.

Professor Nigel Holt, Head of Psychology at Aberystwyth University is in London this week to launch the fourth edition of his best-selling psychology textbook Psychology: The Science of Mind and Behaviour.

Published by McGraw Higher Education, the volume is an important addition to their extensive psychology collection and is the introductory text used by many universities in the UK and further afield.

The latest edition, which has been fully updated to reflect new developments in the field, is co-authored by Professor Holt, Andrew Bremner, Ed Sutherland, Michael Vliek, Michael Passer and Ronald Smith.

Professor Holt said: “I’m very proud to be first author on this book. I've been on the writing team since the original book 15 years ago, and it just gets better and better.”

“Psychology is such a huge topic, the challenge is to write a book that gives an introduction to most of it while allowing enough depth and challenge for it to be used on the courses for which it was designed.”

“The most important new addition in this edition, I think, is a regular section on Psychology at work where we look at the different jobs psychologists do and how the skills learned on a psychology degree can help in any number of workplaces,” he added.

The third edition of the book came to the attention of the wider public in 2015 when it was name checked by Nordi Noir detective Saga Norén, star of The Bridge.

His main research interests are in the relationship between sound and different aspects of cognition including memory, attention and performance. Recent research focus has been on the perception of time and the psychology of cycling and transport.