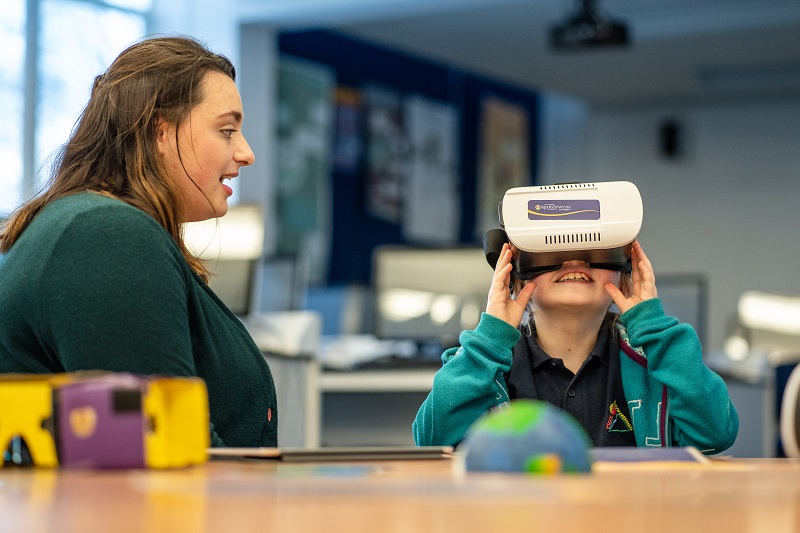 Aberystwyth University is one of five Welsh universities who will be offering mentoring to pupils studying sciences.

The aim of the project is to increase physics take up at A-level, particularly among girls.

Students from the universities are being trained to support almost 240 Year 10 and 11 pupils.

Funded by the Higher Education Funding Council for Wales (HEFCW) and backed by Welsh Government, the mentoring is taking place during spring and autumn 2019 and feature up to 12 schools.

The mentoring of girls will be a priority because they account for just 21.5% of physics A-Level entries in Wales, and less than two out of 10 full-time physics students in Welsh universities.

The mentors are studying a broad range of subjects such as physics, astrophysics, computer games development and mechanical, aeronautical and electronic engineering.

The project will build upon the success of a Welsh Government-funded scheme in which pupils from across Wales are mentored in modern foreign languages using students from Welsh universities.

Professor Andrew Evans, Head of the Department of Physics at Aberystwyth University, said: “From the Eisteddfod to British Science Week, the Royal Welsh and our Robotics Club, we are involved in a range of outreach work with schools in Aberystwyth, Ceredigion and the wider Wales. This mentoring scheme will further strengthen those links and by sharing our knowledge and enthusiasm for STEM subjects, we hope to inspire more young people to continue to study these subjects.”

Teacher Lowri Evans, of Ysgol Bro Hyddgen in Machynlleth, Powys, said: “The school is very proud to be able to take part in this exciting project, because the pupils will gain essential skills that will be important for them in the future.”

The Minister for Education, Kirsty Williams, said: “Deepening and strengthening the links between Wales’s universities, their students and our schools is essential to the national mission to raise standards. Expanding undergraduate mentoring schemes in science, as well as languages and technology, is a key commitment in my progressive agreement with the First Minister.

“Such schemes are essential to enhancing universities’ civic engagement. That’s why we as a Government, through HEFCW, have invested in this exciting opportunity for students to share their knowledge, skills, and love of science and technology.

“Our universities have a special responsibility as stewards of their community. Getting more involved with schools, and making subjects such as physics as stimulating and engaging as possible, will help inspire and ignite passions that lead to new futures, new opportunities and new horizons for all our young people.

“I look forward to continue working with the Physics Mentoring Programme to break down any preconceived barriers and assumptions about STEM subjects, so that all our pupils can appreciate the opportunities and rewards that STEM study and careers can offer.”

Dr Alyson Thomas, Director of Policy and Funding at HEFCW, said: “We can’t underestimate the positive impact of universities on future generations of scientists through schemes such as this one, and the experience that undergraduates will get from it.

“We hope that pupils of all ages will be enthused by taking part in the bilingual scheme, and we are particularly excited about the influence the student role models will have on girls interested in STEM subjects. This programme was a great fit for our civic mission fund, which encourages community engagement with schools.”

Amanda Wilkinson, Director of Universities Wales, said: “As a sector, we welcome the delivery of the Physics Mentoring Project. This innovative project builds upon the successful mentoring work universities have done in modern language and demonstrates the important and valuable contribution that universities make to schools and communities in Wales as part of their civic mission.”