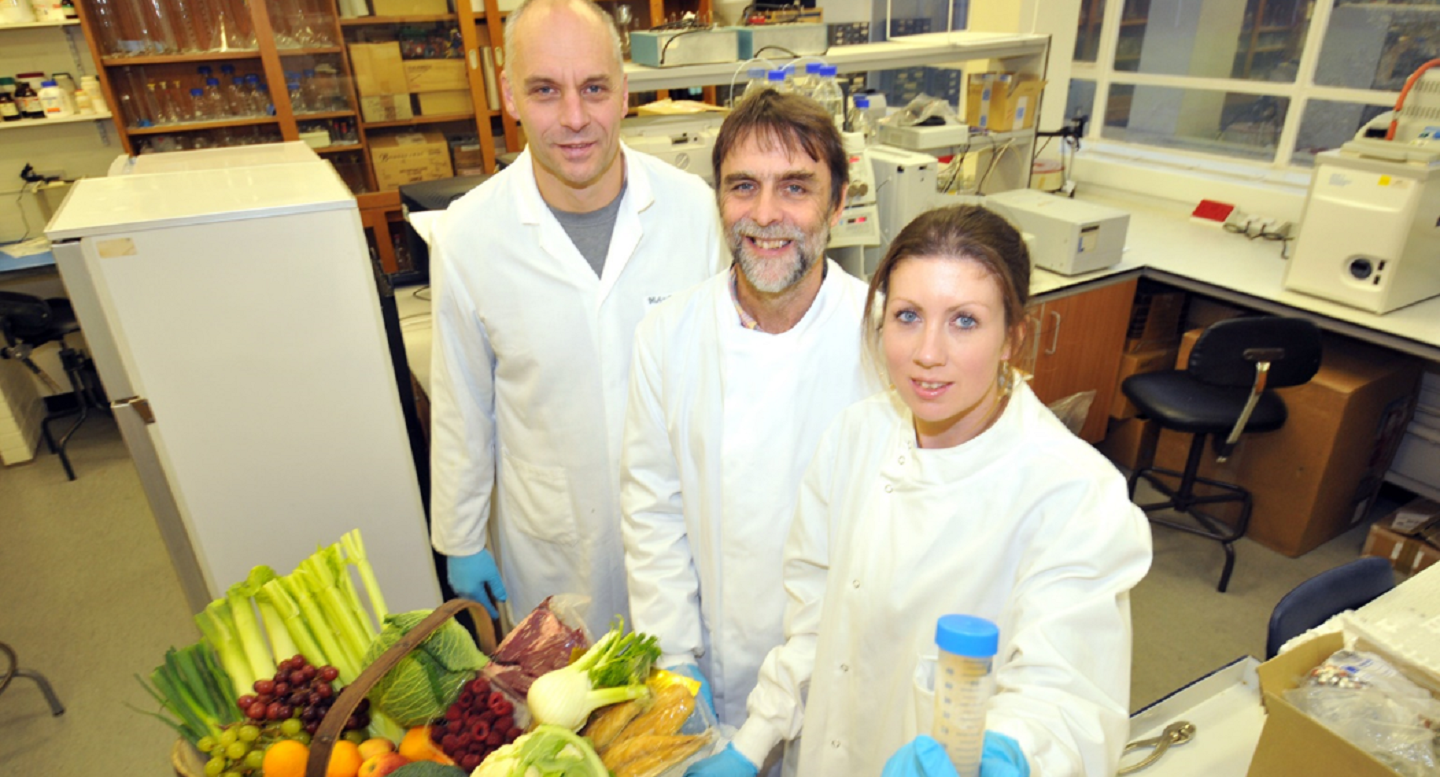 Dr Manfred Beckmann, Professor John Draper and Dr Amanda Lloyd are part of the team at the Institute of Biological, Environmental and Rural Sciences at Aberystwyth University who have developed a simple urine test which can identify more than 50 different types of food.

Scientists at the universities of Aberystwyth, Newcastle and Imperial College have developed a revolutionary urine test which can accurately detect more than 50 different types of foods in a person’s diet.

The test can also detect consumption levels of alcohol and nicotine, including vaping.

It works by measuring chemicals known as biomarkers in urine which are created by the digestion of individual foods or from the breakdown of nicotine or alcohol in the body.

The test means clinicians can check the quality of a patient’s diet without relying on individuals to accurately record what they’ve consumed.

Foods currently targeted include red meats, poultry, fish, cheese, fruit, vegetables, wholegrains and pulses which are highlighted in the Eatwell Guide used by governments and health organisations in the UK.

The test can also monitor exposure to foods which should be consumed in moderation such as chocolate and sugar-rich confectionary, baked goods, coffee, artificially sweetened and/or caffeine-containing soft drinks, as well as give a general picture of the amount of protein eaten.

The original prototype laboratory test was developed for clinical trials by researchers from Aberystwyth University, Newcastle University and Imperial College London in a project funded by the Medical Research Council.

Led by Professor John Draper, the team at Aberystwyth’s Institute of Biological Environmental and Rural Sciences (IBERS) has now expanded the test to include the simultaneous measurement of more than 50 biomarkers for specific foods as well as for smoking, vaping and alcohol consumption.

Professor John Draper said: “Modern diets are so complex, with many people frequently consuming meals they have not prepared themselves.  With literally thousands of different products available on supermarket shelves, it is not surprising that most people have difficulty reporting accurately what they eat.

“The use of food intake biomarkers to measure exposure to key dietary components takes away much of the guesswork. What we have also done is demonstrate how to use urine analysis to understand what people are eating under ‘real world’ conditions and to get urine samples from people living their normal lives.”

Monitoring examples include older people that often lack sufficient protein in their diet, patients convalescing after surgery; malnutrition in developing countries and in the homeless in the UK; individuals at risk of developing diabetes, or diet quality during pregnancy that affects childhood obesity

For the general population, the test could be used as part of health improvement programmes to monitor dietary intake as well as smoking and drinking behaviour.

Evidence suggests people often inaccurately record their own diets, and under-report unhealthy food while over-reporting fruit and vegetable intake - and that the likelihood of inaccuracies in food diaries increases if a person is overweight or obese.

Professor John Mathers, from Newcastle University, added: “These discoveries will make it easier, and likely less expensive, to collect robust information on what people eat without the need for laborious, and time-consuming, questionnaires or diaries. Implementation of these discoveries will help us to understand the links between food and health and to develop better healthy eating advice for the public.”

A demonstration study was carried out for The Great British Urine Test television documentary programme, which was broadcast on Channel 5 in March 2020.

Conducted by the Diet and Health Research Team at IBERS at Aberystwyth University, the aim of the study was to investigate eating, smoking and drinking behaviour using urine biomarkers at both the population and individual level.

In a further breakthrough supported by the European Institute of Technology (EIT-Health), the teams at Aberystwyth and Newcastle, working with specialist clinical sample packaging manufacturer Shuttlepac, have developed a urine sample collection and transport kit that can preserve the sample without refrigeration and which can be posted though a normal-sized UK letter box.

This innovation makes it easy for the test to be used either in the home or in a community setting.

It greatly expands the scope for screening eating behaviour across large groups, without the need to attend a GP surgery or a hospital clinic to provide samples.

The technology is currently being trialled in several research centres to track the diets of vulnerable groups of individuals in which nutritional problems are common.