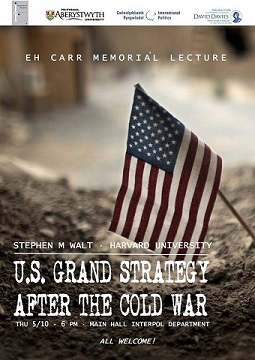 Professor Stephen M. Walt (Harvard) delivered the 34th E.H. Carr Memorial Lecture on 5 October 2017. A packed Main Hall of the Department of International Politics listened as Professor Walt spoke about US Grand Strategy after the Cold War. His lecture was guided by two fundamental questions: Can realist theory explain it? Should realism guide it?

Professor Walt opened the lecture by advising students to be more like Carr: write well, be critical, clear, but also occasionally entertaining. After a brief outline specifying what realism has to say about foreign policy, Professor Walt showed how the United States’ foreign policy can be explained by the realist theory. Professor Walt proceeded with a summary of the United States’ international history. The thirteen independent and isolated colonies eventually became a superpower able to build an international liberal and democratic order. The United States was able to see the world as it was. It retained power, survived in the anarchic international system, and accumulated resources and allies around the globe. Professor Walt noted how the US tries to portray itself to its citizens and allies as the country following high and good morals. However, Professor Walt proposed that the United States acts out of self- interest and portrays its ‘competitors’ as evil and unmoral. Quoting the 41st President George H. W. Bush, the US “found itself standing alone at the pinnacle of power, with the rarest opportunity to remake the world”, and so the United States did. Following the realist approach, Professor Walt proposed that the United States ought to scale back its efforts in Europe, as the Russian power is in decline. Furthermore, authoritarian regimes are unlikely to rise again in Europe. Instead, the US ought to give attention to Asia, especially given the rise of China as an economic power, if it wants to maintain its international standing. Professor Walt also took some time to analyse how Donald J. Trump does not fit in this realist picture. President Trump seems to care only about his personal agenda, has a lot of power that he doesn’t comprehend, is running a foolish foreign policy, and is not following those realist promises he gave during the 2016 campaign. However, Professor Walt expressed his hope that as the United States survived great crises in the past, it will survive President Trump.

A vidcast of the 2017 E.H. Carr Memorial Lecture can be found HERE.