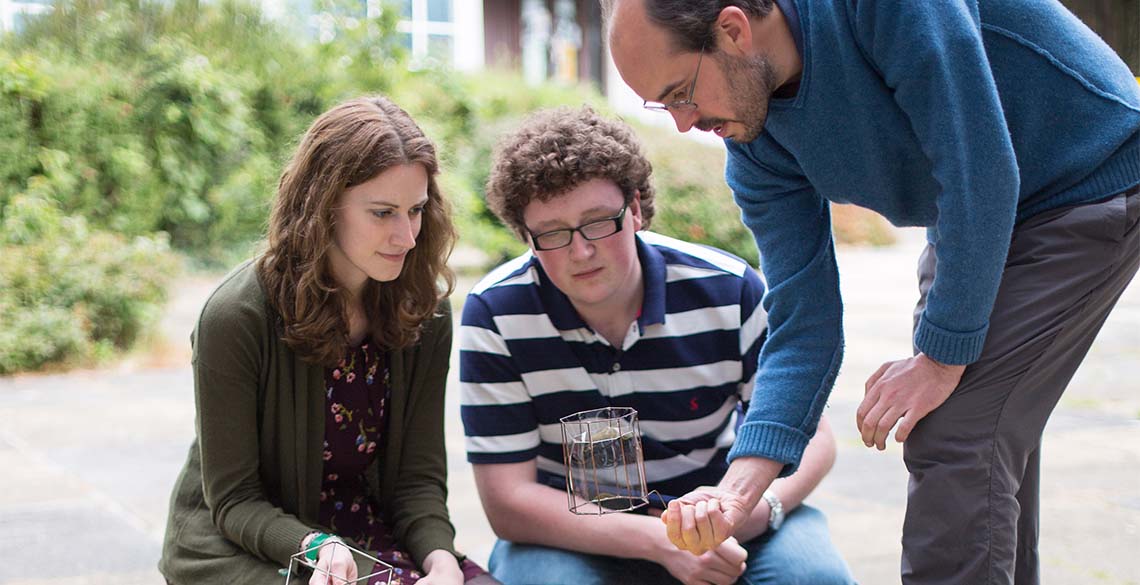 Specific projects may vary from year to year, and related projects may be offered in consultation with the department.

Packing of hard ellipsoids in cylinders

Recent simulations that seek to identify the densest packing of monodisperse hard spheres in a cylindrical tube have revealed a remarkable sequence of structures. Such examples of packing problems have a long and fascinating history and their study continues to be of interest to modern science. While the dense packing of spheres in cylinders is relatively well understood, far less is known about the packing of non-spherical objects. In this project you will investigate the dense ordered packing of hard ellipsoides in cylinders. You will use a combination of numerical techniques (simulated annealing, conjugate-gradient methods, parallel code) and analytical methods to investigate structures generated by packing ellipsoids in narrow channels, and compare them against known sphere-packing results.

Modelling of liquid drainage within foams

Foams are familiar from everyday experience, but they are also used industrially. Examples include the flotation process for the separation of metal ores from rock and enhanced oil recovery from porous rocks. Research in this area is directed towards modelling the static structure of aqueous foams, and then exploring the fluid dynamical properties.

This project will analyse the nonlinear partial differential equations describing liquid flow through this rather special porous medium. Changes in the shape of the vessel used to hold the foam lead to re-distribution of this liquid. The aim of the project is to predict the liquid distribution in various shaped containers so that industrial processes such as froth flotation can be made more efficient. See http://users.aber.ac.uk/sxc/foam.html for further details.

This project involves the bubble-scale numerical simulation of the flow of foams.  Possible areas of application include the sedimentation of non-spherical objects through a foam, and flow through pipes containing constrictions and corners, as appear in discrete microfluidics.  Algorithms need to be developed to make simulations with many bubbles tractable. See http://users.aber.ac.uk/sxc/foam.html for further details.

A dry foam is a collection of polyhedral bubbles surrounded by thin films. Its high-interface structure leads to a multitude of industrial and domestic uses. The surface energy of a three-dimensional foam is the surface area of the films multiplied by the surface tension of each one.
A foam in equilibrium attains a local minimum of this energy, subject to the constraint of fixed bubble volumes. This project will seek the arrangement of a given number of bubbles within a fixed container, such as a sphere or a cylinder, that gives the global minimum of the energy. A combination of geometrical skills with either analytical and/or numerical enumeration is required. The results may have applications in developmental biology. See http://users.aber.ac.uk/sxc/two_d_clusters.html for further details.

In recent decades there has been considerable interaction between the applied discipline of classical control theory and some pure mathematics in the theory of operators on Hilbert space. For example, the concepts of controllability and observability have a counterpart in the theory of functional models for contractions on Hilbert space and the problem of robust control is related to operator interpolation problems. It is fascinating to revisit such connections in the emerging new discipline of control for quantum systems. The fact that in such systems there are observables which do not commute with each other gives rise to new types of questions which have no counterpart in the classical theory.

In our Quantum Control Research Group we are beginning to work on these questions and a carefully chosen aspect of this topic matching with the previous knowledge of the candidate could be the starting point of a PhD project. A solid basis in functional analysis combined with interest in control theory and quantum physics would be fine.

This project is concerned with innovative modelling of physical processes using optimal mass transfer, and proving rigorous results for the new classes of cost functions introduced. The archetypal optimal mass transfer problem is to find the optimal way to transfer mass from a set U to a set V, amongst a set S of allowable strategies, where optimality is measured against a non-negative cost function c = c(x, y). One interprets c(x, y) as being the cost per unit mass of transporting material from x ∈ U to y ∈ V . The set S is described by a set of measure-preserving mappings. Depending on the cost function, there may be one, many, or no solutions; since the 1980s considerable progress has been made classifying optimisers for a variety of cost functions and settings (e.g. Riemannian manifolds).

Previous studies have been motivated by problems in meteorology, for example nding more sophisticated ways of measuring weather forecast error (and more generally quantities where displacement is a major cause of difference), and aerodynamic resistance, where one is optimising the shape of an object.

The aim of this project is to demonstrate nonlinear stability of solutions to the semigeostrophic equations, a model for weather fronts forming and moving. Stability is understood in the sense that if initial conditions are suffciently close in some Lp norm, the solutions remain within a specified distance for subsequent time.

Planar ideal fluid flow in a bounded domain has a vorticity/stream function formulation as a coupled Poisson equation/transport equation. Vorticity is conserved following the flow; possible vorticities must lie in a set of rearrangements. There is a principle, which has its origins in the work of Kelvin, that energy maximising flows should be stable. G.R. Burton has demonstrated nonlinear stability of flows corresponding to strict energy maximisers over the set of rearrangements of a prescribed vorticity. The semigeostrophic equations have a dual formulation as a coupled Monge-Ampere problem/transport equation. There is a Lagrangian conserved quantity, a geostrophic energy, and the Cullen-Norbury-Purser minimum energy principle. The aim is to identify an appropriate existence theory for the semigeostrophic system in dual form, and show that solutions corresponding to energy minimisers relative to the weak closure of the set of rearrangements of a prescribed function are nonlinearly stable.

Modelling of waves and fault propagation in inhomogeneous lattice structures

Lattice structures are important media possessing properties which are unusual for a continuum. Recently various lattice structures have been used in industrial applications, for example as filters for elastic waves. Optimisation of the geometrical, mechanical and other physical parameters allows also to create specific band gaps in the structure capturing some frequency regimes and to improve its resistance to possible damage/fracture (or reorient it in a less dangerous direction).
The project will deal with an infinite inhomogeneous lattice structure consisting of particles of different masses linked by small rods exhibiting specific mechanical properties. The aim of the research will be to investigate how structural interfaces and faults (cracks) appearing in the lattice structure affect its strength and dynamical properties. Both theoretical and numerical approaches will be used in the analysis. A strong background in Applied Mathematics or Computational Sciences and Engineering would be required.

Modelling of crack propagation in hydrofracturing

Hydraulic fracturing is one of the major techniques of reservoir stimulation employed by the petroleum and gas industry. The essence of hydrofracturing is pumping fluid into a wellbore at a pressure exceeding fracturing pressure of the target formation. As a result, more of the reservoir is reached and more material can be extracted. An important feature of hydraulic fracturing is insufficient, hard to obtain, uncertain and often unavailable geometrical and mechanical data on the in-situ structure, state and properties of rocks and on the changes induced by fracturing. On one hand this decreases the reliability of the input data needed for numerical simulation; on the other hand, it complicates validation of the output results obtained in numerical simulations. Therefore, there is a need to improve mathematical modelling and numerical simulations of the corresponding coupled problem of fracture propagation and fluid flow. Both more theoretically or more numerically oriented projects are available. A strong background in Applied Mathematics or Computational Sciences and Engineering would be required.

Piezoelectric composites have had various industrial applications. For example, piezo-actuator is widely used in motor-engines. Such devices are composite structures consisting of anisotropic elastic ceramic layers with integrated electrodes. In the process of exploitation, damage accumulated in the structure may lead to it fracturing and can seriously affect the properties of the structure. The respective mathematical problem is formulated as so-called coupled BVPs (boundary value problems) with mixed (partly nonlinear) boundary and transmission conditions. Moreover, the transmission conditions may well represent a so-called perfect or imperfect interface model depending on the material parameters. Finally, singularities of the elastic and electrical fields at the electrode tips are an important factor in the analysis, as they allow prediction of the long-time behaviour of the structure under consideration. A small parameter in the problem (the characteristic thickness of the electrodes) allows the effective use of asymptotic techniques to find an approximate solution. The project deals with analytical and numerical analysis of the problem. A strong background in Applied Mathematics or Computational Sciences and Engineering would be required.

A thin interphase between different materials is a common phenomenon. It may exhibit various properties depending on the physical features of the interphase (it may be a glue connecting two solid bodies or liquid flow between two surfaces or even a complex structure  consisting of elements of a lower dimension (rods, shells) linking two solid bodies). Such interphases bring essentially different properties to the whole structure in comparison with a material without interphases. The challenge is to determine the properties of the new structure, whose complexity arises not only from its geometry but also from the different physical properties of the interphase material. The well-known “phenomenological” engineering approach consists of determining some properties of the structure from experiments and then replacing the interphase with a zero thickness interface between the materials with specific (phenomenologically prescribed) properties. Such an imperfect interface is defined by the respective transmission conditions matching the solution from different regions. Another approach is to evaluate the transmission conditions from the original problem by means of asymptotic analysis, taking into account small parameters and other available information about the interphase. As a result, one can not only obtain accurately justified transmission conditions but also to estimate an error introduced in the original problem by replacing the thin interphase with the corresponding imperfect interface. Projects theoretically or numerically oriented are available and will deal with different mechanical and physical phenomena (multiphysics) appearing within the interphases. A strong background in Applied Mathematics or Computational Sciences and Engineering would be required.

The Cardigan Bay Marine Wildlife Centre has been gathering an observational data set on the bottlenose dolphins, harbour porpoises and Atlantic Grey Seals of Cardigan Bay since 2005.  Most days, a volunteer from the centre goes out on one of the dolphin-watching boats that leave from Newquay harbour in West Wales. There are three main sub-projects within this PhD proposal: