The charge detector array has been in use at Aberystwyth since April 2004 and has been used at the Synchrotron Radiation Source at the Daresbury Laboratories on a number of occasions since then.

The results presented here are a small sample of some of the key performance indicators for the detector. Also included are some application results showing how the use of an array detector such as the Aberystwyth MCD can radically improve the science being carried out. 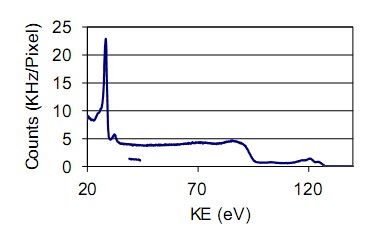 The graph above shows a spectrum taken on the secondary electron tail of a silicon sample on beamline 4.1 at the SRS Daresbury Laboratory. A single pixel from the detector is presented, showing the ultimate count rate in excess of 40KCounts per sec per pixel.

With any array detector there will be a variation in sensitivity from channel to channel.

The graph below shows the response of a 384 channel detector to uniform illumination. 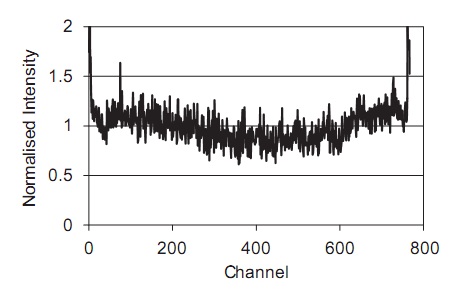 The rms variation in response is 8% across the array. This is due to variations in the detector itself and also variation in MCP performance.

The detector has been used to study a variety of systems including: