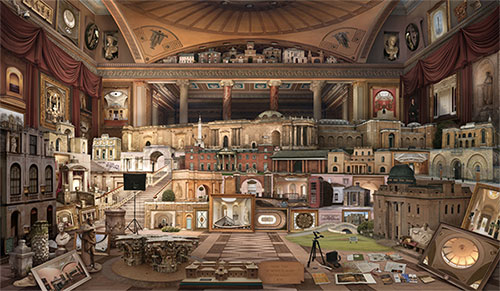 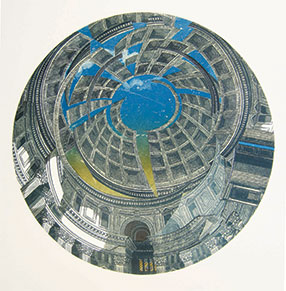 Emily Allchurch, Anne Desmet and Catrin Huber respond to the architectural legacy of renowned British architect Sir John Soane (1753-1837) and the continued relevance of his ideas to contemporary artists. A Sense of Soane was previously exhibited at Pitzhanger Manor in West London. The late 17thC manor was remodelled by Sir John Soane to incorporate curved ceilings, false doors, hidden cupboards in wooden paneling and mirrors inset into walls. These innovative architectural elements, as well as Soane’s theatrical decorative schemes for his collection of classical antiquities, are the starting points for the works in this exhibition.

Emily Allchurch trained at the Royal College of Art and has exhibited throughout Europe, Japan and the USA. She featured in the BBC4 series A Digital Picture of Britain (2005), Britain in Pictures (2007) and This Green and Pleasant Land (2011). In Grand Tour: In Search of Soane (after Gandy), Allchurch has meticulously collaged her own photographs of Soane’s buildings, their interiors and architectural elements to create a large back-lit transparency. This is a 21stC re-imagining of Joseph Gandy’s painting Perspective of various designs for public and private buildings executed by John Soane between 1780 and 1815, punctuated by contemporary graffiti, signage and street furniture. More than a Grand Tour of the architect’s work, it plays with scale and time, depth and surface, documentation and dreams. Meanwhile, Urban Chiaroscuro 4: Rome (after Piranesi), pays homage to Piranesi’s Carcere d’Invenzione (Imaginary Prisons). Allchurch scatters Piranesi’s sinister and paradoxical prison interior with references to contemporary methods of surveillance and control - CCTV cameras, shadows of hidden figures and hazard warning notices.

Anne Desmet, who is Honorary Fellow of the School of Art at Aberystwyth University, was elected a Member of the Royal Academy of Arts (RA) in 2011. She has won over 30 national and international awards, including a Rome Scholarship in Printmaking, and exhibited widely in Europe and throughout the UK, including two major retrospective exhibitions at the Ashmolean Museum, Oxford and the Whitworth Art Gallery, Manchester. Her works are in public and private collections worldwide including 19 works in the Aberystwyth University’s School of Art Collection. She is also author of several books on creative printmaking. Desmet uses printmaking techniques and collage to explore both Soane’s architectural fantasies and his extensive collections of archaeological material. Collages on glass lenses, made up of segments of her own architectural engravings and linocuts relating to Soane, refer directly to the convex mirrors set into the walls and ceilings of the Sir John Soane Museum. She collages fragments of architectural images onto found objects, pebbles, shells and tile shards thus calling attention to the continuing resonance of Soane’s own archaeological collections.

Catrin Huber studied at the Staatliche Akademie der Bildenden Künste in Karlsruhe and at the Royal College of Art. She exhibits her work nationally and internationally and has won numerous awards, residencies and scholarships from bodies including the DAAD, Abbey Awards and the Cité Internationale des Arts, Paris. Her work is in national and international public and private collections such as the Sammlung Baden-Württemberg (Staatsgalerie Stuttgart) and the Royal College of Art. Huber is currently Senior Lecturer in Fine Art at The School of Arts & Cultures, Newcastle University. She uses painting, drawing, photography, collage and digital media to explore ways of representing architectural, fictional and imagined space. The resulting work is sometimes abstract and sometimes focuses on specific buildings or sites. In her installation Grammar of Clouds at Pitzhanger Manor, she bathed the Drawing Room in a succession of coloured lights, projecting collages of clouds on to the ceiling, echoing and complementing Soane’s theatrical use of light and the sky-ceiling painting in the Breakfast Room. The original collages from the Syntax of Clouds series are exhibited in the Aberystwyth exhibition.