We have 7 webcams at the moment, one per subsystem, watching the Robot Scientist 'Adam' day and night. These are 2 Axis 207s, a D-link DCS-900 and 4 USB Logitech QuickCam Pro 5000s. We use these to replay any errors that may have occurred and to check on the health of the system remotely.

Robot Scientist 'Adam' summary (WMV 10Mb)
A yeast library plate is taken out of the freezer. Various strains are stab-picked from this frozen plate and used to inoculate a plate containing rich medium. This plate is transferred into an incubator and grown for approx 24 hours to recover. The plate then undergoes liquid handling (not shown) to normalise cell densities in a defined medium and add metabolites. Finally there is an incubate-shake-read cycle to take growth measurements for approx 3 days. 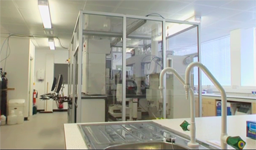 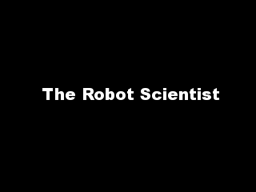 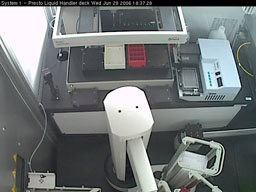 System 1 from the beginning (MPEG 6Mb).

The Robot starts by selecting a plate from its stack, reading its barcode and putting it in the multidrop to fill it with the rich medium, YPD. It then places the filled plate on the deck of the Presto Liquid handler and removes the lid. Next it selects a tip rack from the stack and puts this in position on the liquid handler. Then a library plate is unloaded from the freezer, placed on the deck of the liquid handler and de-lidded. Finally the hit picking of samples from the library plate to inoculate the medium-filled plate begins. 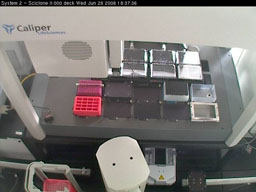 On the deck of the Sciclone where the experimental conditions are made up. The Sciclone is preparing the growth medium plate by adding the appropriate amounts of each of the required nutrients, pipetting different amounts into each well of the 96-well plate. The 8 nutrient reservoirs can be seen at the back of the deck. The sciclone rinses the tips in the tip wash solutions after each nutrient is used. Finally it will inoculate the plate with yeast from the pregrowth plate, which is waiting after being spun and washed at the front of the deck. 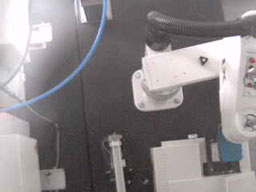 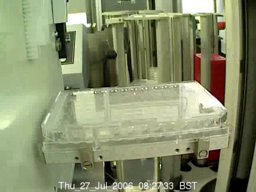 An hour in the life of an incubator (AVI 6Mb).

Plates come and go. Recorded at 1 fps, saved as 25fps. 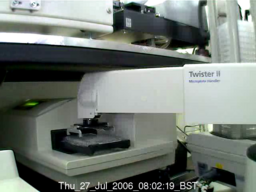 An hour in the life of a plate reader (AVI 6Mb).

Plates come and go. Recorded at 1 fps, saved as 25fps.

Our master chemical compound library is stored offline, sealed in 2D-barcoded tubes. In order to use the library on the robotic system for screening experiments, Eve must first reformat that library from tubes into 384-well daughter microtitre plates. The following video explains that process.

With a daughter copy of the chemical compound library prepared, Eve is then able to start a mass screening campaign against a biological assay. Our current growth-based assays produce a fluorescent protein that can be detected over time in a plate reader. The following video explains that mass screening process.

Once a portion of a mass screening campaign has been performed, the aim is for Eve to then have gained enough information to switch over into a cherry picking mode whereby it selects specific compounds to screen. [Video to follow later]