MoDeL project is a psychologically-inspired investigation of an analogy of infant play as the central mechanism for autonomous, self-motivated robots that learn the local physics of their world. This work builds on the outcomes of the IM-CLeVeR project.

It is noted that infants and children at play exhibit exactly the kind of autonomous learning that would be very desirable in robotics. Infant play has a major role in the acquisition of new skills and cognitive growth.  Noticing that early infants spend hours in play, a computer analogy of infant play is designed by which an in-depth investigation into the use of play as a means of building subjective understanding of the physics of the local world is conducted.

The project implements a play generator algorithm on the iCub humanoid robot that allows experiments with a wide range of scenarios involving varieties of objects to be performed. This includes playing solitarily with objects to learn their properties, and interactive play with a human participant. Experiments with tool use (using one object as a tool for acting on another) are also included, in order to investigate how objects may become extensions of self.

The data from the experiments are analysed and interpreted to shed light on a set of scientific issues. General principles for robot learning through play are extracted from the results, whose applicability in new robotic and intelligent systems developments is assessed by this research.

It is strongly believed that technologies with a developmental approach have a wide implications and provide an alternative to "building robots" by establishing the idea of "developing robots" for applications. 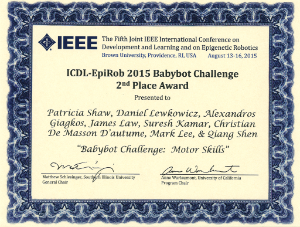 iCub was used to reproduce the longitudinal study of early reaching in infants between the ages of 1 and 19 weeks, as part of the Babybot challenge at the IEEE International Conference on Development and Learning and on Epigenetic Robotics 2015.  The study of the challenge was based on the work Claus von Hofsten presented in 1984, a major finding of which was that the number of successful reaches in babies declined at week 7 and increased again just after, forming a U-shape activity curve.

By utilising the MoDeL's architecture and system and by carefully designing experiments based on the findings and constraints reported in the infant development literature, the iCub robot was able to experience an artificial staged development similar to the infants in the initial study.

The presented study was awarded the second place in the challenge as iCub was shown to achieve similar results in terms of successful reaches and allowed conclusions related to the importance of mapping early sensory-motor experience and repetitive interactions during infancy to be drawn.

A video showing the progress iCub makes during the longitudinal study can be viewed on The Developing iCub page. 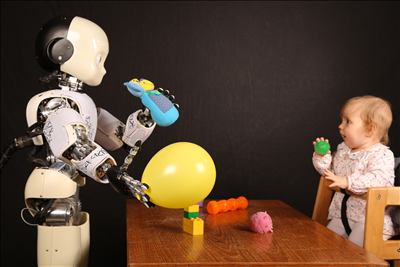 Following the success in 2015, Sandy Spence and research staff of the project MoDeL won the 1st prize in the People Category of the Engineering and Physical Sciences Research Council (EPSRC) photography competition for a second, consecutive year!

Little Caiya features in 'iCub and the tutor', sharing her toys with the robot while playing.

The image reflects MoDeL's research work, investigating mechanisms that allow the iCub to autonomously learn properties of its immediate physical environment, based on infant development and learning though playing.