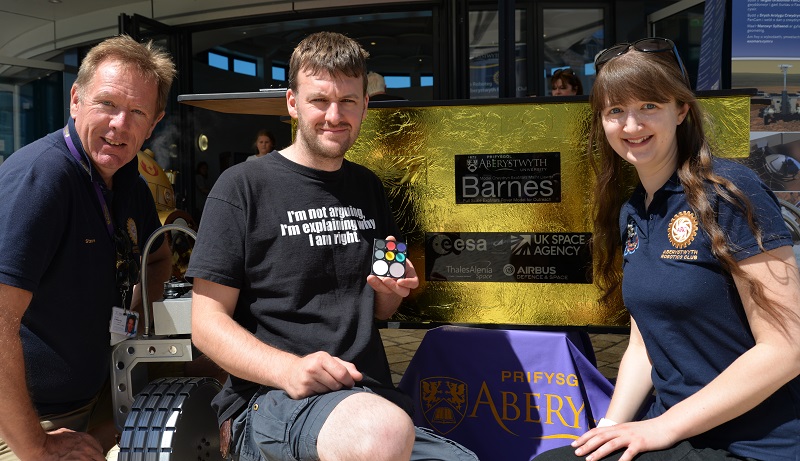 Pictured left to right are Stephen Fearn and Dr Matt Gunn who have built the Barnes ExoMars Rover, and Dr Helen Miles. Dr Matt Gunn is holding the mission’s colour calibration target which was developed by the late Professor Dave Barnes.

A full scale model of the ExoMars rover which is set to search for life on Mars in 2021 has been named after a pioneering Aberystwyth University space roboticist.

Barnes has been named after the late Professor Dave Barnes who initiated Aberystwyth University’s involvement with the European Space Agency / Roscosmos mission to Mars.

Professor Barnes, who died suddenly in 2014, was also a leading member of the team that developed and built the innovative Beagle2 lander that formed part of the 2003 Mars Express mission.

Built by Stephen Fearn and Dr Matt Gunn from the Department of Physics, the Aberystwyth replica was unveiled by Sue Horne MBE, Head of Space Exploration for the UK Space Agency, and Dr Helen Miles from Aberystwyth University on Friday 29 June 2018, at a celebration of the work of Aberystwyth space scientists and solar physicists.

The Barnes ExoMars Rover will be used to promote the ESA/Roscosmos mission which is due to launch in 2020.

Using cameras and emulated instruments, the interactive model will also explain some of the science the mission’s actual rover will perform once it has landed on Mars.

Dr Helen Miles from the Department of Computer Science at Aberystwyth University has been instrumental in designing many of Aberystwyth’s ExoMars outreach activities.

Dr Miles said: “Deciding to name our full size model after Professor Dave Barnes was a poignant moment for us, but one very much in keeping with a tradition that has developed over the years. Several prototype rovers have been built as we prepare for the mission, and all have names starting with ‘B’.

“There are several prototype rovers in existence, Bridget, Brian and Bruno developed by Airbus, and here at Aberystwyth we have been working with a miniature half scale prototype that we have called Blodwen. So Barnes fitted perfectly.”

Dr Helen Miles developed a virtual model to produce simulated camera images from the rover, which is being used by engineers building the mission’s actual rover for the mission.

The ESA/Roscosmos ExoMars Rover is being developed by Thales Alenia Space and built by Airbus Defence and Space in Stevenage.

Professor Barnes’ work on ExoMars included the development of the rover’s colour swatch, which was inspired by medieval stained glass.

Designed to withstand the very high levels of ultraviolet light on Mars which causes colours to fade quickly, the swatch will be used to calibrate the mission’s camera and spectrometer systems to ensure colours are recorded accurately.

Professor Barnes’s work has been progressed by the space robotics team at Aberystwyth University, led by Dr Matt Gunn.

Dr Gunn is a member of three international instrument teams on the ExoMars mission;

The Aberystwyth team have been involved with field testing of prototype instruments and developing the pipeline for processing images sent back to Earth from Mars.

Dr Gunn and colleagues have been testing the mission’s camera system, PanCam, in remote desert like locations around the world, including Iceland, Utah in the USA and the Atacama Desert in South America.

Dr Gunn said: “The camera systems on this mission are highly sensitive as the scientists who work with these images will be looking for very subtle changes in colour. These images are not ordinary colour photographs; they will be used to work out the different types of rocks on Mars. It is known that some rocks form in wet environments, so accurately interpreting the images may help mission scientists to pinpoint where to look for possible signs of life.”

“Professor Barnes started all of our research with ExoMars and was a pioneer in space robotics. He is dearly missed and naming the Aberystwyth model is particularly apt. We are hoping the model will continue to inspire people in the way that Dave inspired us.”

The Aberystwyth ExoMars Rover is available for shows and school visits. To find out more visit the ExoMars at Aberystwyth University website. It is also possible to follow Barnes on Twitter @BarnesRover.