The Aberystwyth advanced multichannel detector [1] has been used to follow the Schottky to ohmic transition of Al contacts on p-type diamond revealing that it is more complex that previously believed [2]. Deposition of Al contacts on diamond at 294K resulted in a uniform layer which induces band bending in the diamond resulting in a barrier height of 1.05V (obtained by current-voltage measurements). Using a laboratory source, we then recorded C1s photoelectron spectra in snapshot mode (Fig 1) revealing the kinetics of the temperature-induced Al-diamond interface transition for the first time. During the temperature-programmed ramp to above 1100K fitting of the C1s spectra (Fig 2) revealed a small reversible shift in peak position followed by an abrupt change in band bending at 755K which corresponds with the onset of carbide formation. The increase in peak intensity suggests a simultaneous clustering of the Al. A second transition point occurs at 1020K where bulk carbide formation accelerates the Fermi level shift driving the contact irreversibly ohmic. 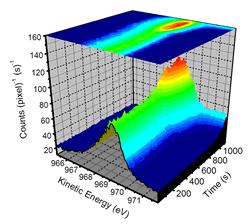 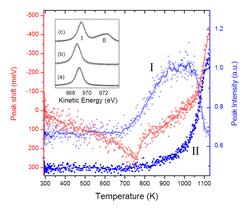