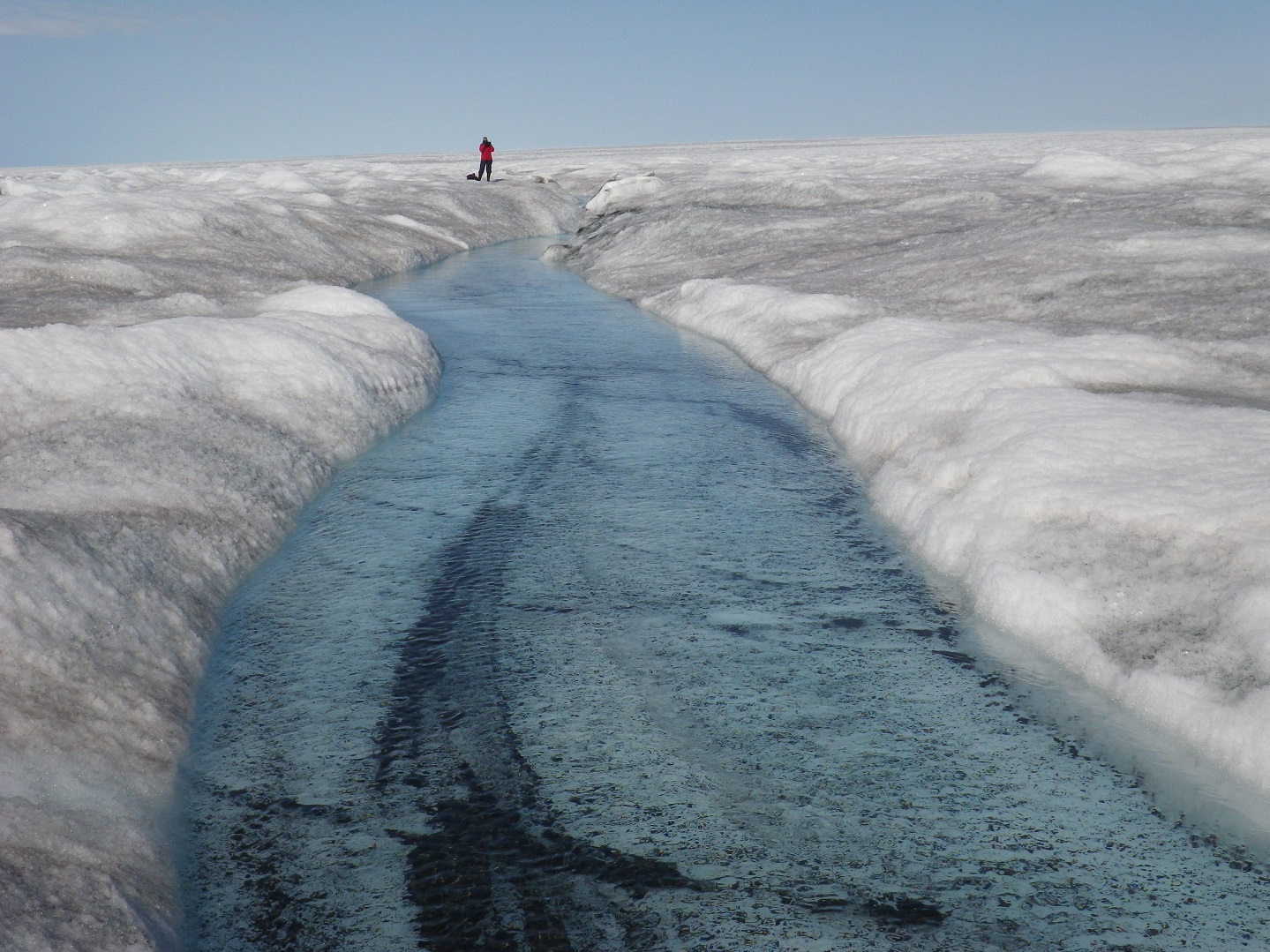 The Greenland Ice Sheet could be under threat from microbes on its surface multiplying faster than they are washed away in a warming climate, according to new research from Aberystwyth University.

The Greenland Ice Sheet is the largest mass of ice in the northern hemisphere.

It covers an area about seven times the size of the United Kingdom and reaching up to 3 km (2 miles) deep.

Its surface harbours a wealth of microbial life, including algae, which can change the ice’s colour by photosynthesising and storing carbon during summer months.

These carbon deposits are removed by natural wash-off by meltwater.

Newly-published analysis in the journal Nature Communications by Aberystwyth University scientists concludes that the amount of these deposits increases faster than they are washed away.

The researchers estimate that meltwater removes 37 kg of carbon deposits from every square kilometer of the melting ice sheet surface each summer.

Their study suggests that every square metre of the ice sheet’s melting surface is home to at least 1,500 million microbes that keep growing and multiplying, but only 190 million of these get transported to the streams that flow on the ice surface each day.

This means that the ice sheet surface accumulates carbon, experiences enhanced carbon exchanges and may darken.

A darker ice sheet would reflect less sunlight away into space, meaning the ice sheet will melt more - this could also contribute to climate change and sea level rise.

The academics analysed meltwater samples using a laser instrument called a flow cytometer to count the numbers of microbes present.

As part of their work, the researchers also used drones to map meltwater streams on the western Greenland Ice Sheet.

“The Greenland Ice Sheet surface is fascinating. We know that it simultaneously acquires and exports carbon, but many of the pathways and processes associated with this carbon are still a mystery. Our analysis reveals that more microbes are accumulating on the surface than are being washed away. More microbes means more organic carbon. This could contribute to the darkening of the ice sheet surface, which will continue to increase as greater areas of ice habitat are exposed in the summer melt season.”

The research also estimates for the first time how much microbial carbon is reaching the ice sheet’s bed.

As more carbon is transferred from the ice sheet’s surface to its bed, more methane could be produced - a greenhouse gas which contributes to climate change.

“Our work is the first assessment of how much carbon is being transferred from the surface to the bottom of the ice sheet. This baseline estimate gives us key insights into another factor that affects climate change, namely supporting the microbe-rich ice-bed ecosystem and fuelling methane production there.”

“The study’s findings support the conclusion that far from being lifeless icy wastes, Earth’s ice sheets teem with microbial life. As we continue to warm the climate, the fate of these microbes and their role in Earth’s carbon cycle becomes intertwined with the fate of their icy habitats, and thus our future.”

The research benefitted from support from the Royal Society, the UKRI’s Natural Environmental Research Council, The Leverhulme Trust, along with other backing including Aberystwyth University.