‌Our research focuses on the structural evolution of Antarctic Peninsula ice shelves with respect to recent environmental changes in the region. We use a catalogue of optical and microwave satellite datasets to detail the structural development and dynamic regimes of several Antarctic Peninsula ice shelves, including Larsen B (Figure 1), Larsen C, Prince Gustav, George VI (Figure 2, Figure 3), Bach and Stange.

‌We show that ice-shelf structures can be used as visual marker for ice-shelf instability long before any final collapse phase.  On Larsen B, the development of structural discontinuities in the ice played a significant role in the rapid demise of the ice shelf, coupled with failures along its thin, weakly sutured flow-unit boundaries, and continued recession at the ice front that reduced the back force exerted on the ice shelf.

‌Our investigations on George VI and Stange Ice Shelves reveal similar structural instabilities, although these are in no danger of imminent collapse. There has been an increase in the extent and distribution of crevasses and rifts on both ice shelves since the early 1970s in areas where increased flow speeds and surface lowering have also been measured. ‌These changes have been attributed to the southward migration of the -9°C mean annual isotherm and evolving oceanic conditions that together are eroding these ice shelves from above and below. 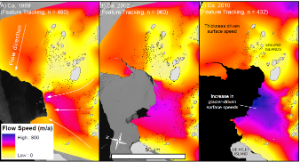