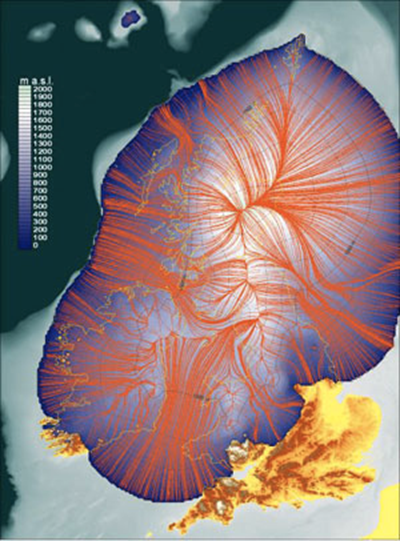 Numerical modelling is an important glaciological tool for helping provide insights into the way ice sheets behave and react to a number of external and internal forcings. Given recent remotely-sensed observations of dramatic acceleration, thinning and retreat of the outlet glaciers of the Greenland and West Antarctic ice sheets, we now know that the these ice-sheet systems can respond on very short decadal to centennial time-scales. Investigating the dynamics, fluctuations and forcing/response functions of a highly ‘accessible' palaeo-marine ice sheet (i.e. one that has left plenty of evidence within the marine and terrestrial landscape), is thus seen as critical for understanding contemporary rates of rapid cryospheric change and sea-level rise in our polar regions.

Here at the Centre for Glaciology, a three-dimensional, high-resolution model has been developed that is capable of simulating the dynamic growth and decay of an ice sheet through a whole glacial cycle. Numerical experiments of the British-Irish ice sheet (BIIS) - one of the best empirically constrained palaeo-ice sheets worldwide - have indicated that it was an incredibly dynamic ice-streaming system, that experienced repeated binge-purge cycles driven by internal instabilities moderated by external climate forcing. Purge-phase ice-streaming cycles were widespread, associated with massive iceberg calving events that decanted huge volumes of freshwater into the oceans. Furthermore, it appears that the deglaciation of the BIIS from its maximum extent in response to climatic warming was rapid, occurring in less than 2,000 years. 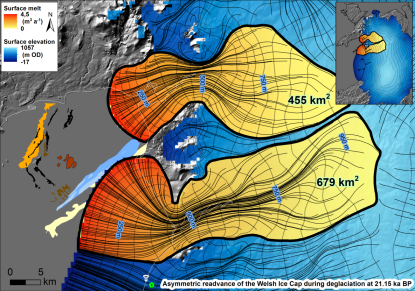 This oscillating stability of the ice sheet resonates not only with the emerging ‘dynamic’ paradigm of BIIS growth and decay which has gained momentum over the last decade, but also with more localised, high-resolution modelling case studies. Examination of catchment-scale dynamics of the Welsh Ice Cap, for example, confirm asymmetric retreat patterns to be commonplace, with outlet glaciers exhibiting complex feedbacks during deglaciation in response to a variety of internal and external drivers.

From the links below you can download animated movies and also interactive Google Earth plugins of selected ‘optimal’ ice sheet reconstructions. Brief details of the climate forcings in each simulation is provided, though reading of the recommend publications is warranted for further details of these experiments.

*There may be a case for arguing that the median experiment, E109b8 is our ‘most representative' simulation and E102b2 and E109b2 provide useful bounds on potential minimum and maximum behaviour that are in the realms of possibility and still honour the on- and offshore record.