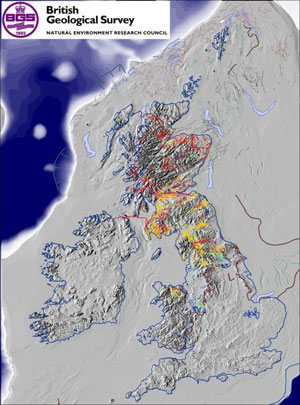 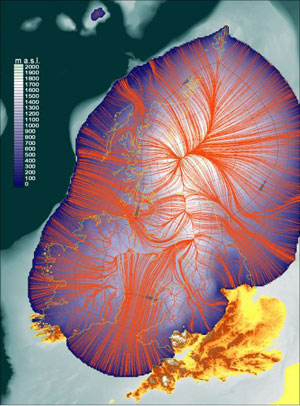 At the Centre for Glaciology, we have been developing a new, high-resolution computer simulation of the dynamics and fluctuations of the last British and Irish Ice Sheet (BIIS) over the course of the last glaciation. This research has been carried out closely with collaborators in Edinburgh - at the British Geological Survey and the University’s School of GeoSciences. There have been some important breakthroughs in modelling the dynamics of marine-based ice sheets in the last couple of years, which means that our understanding and ability to simulate them has vastly improved. Furthermore, given recent remote-sensing observations of the dramatic acceleration, thinning and retreat of the outlet glaciers of the Greenland and West Antarctic Ice Sheets, we now know that the these systems can respond on decadal to centennial time-scales. Hence, investigating the dynamics, fluctuations and forcing/response functions of a highly ‘accessible' (i.e. one that has left plenty of evidence within marine and terrestrial landscape) palaeo-marine ice sheet can provide a much needed analogue for understanding contemporary rates of rapid cryospheric change and sea-level rise.
Our numerical experiments of the BIIS indicate an incredibly dynamic ice streaming system that experienced repeat binge-purge cycles driven by internal instabilities and moderated by external climate forcing. The purge-phase ice streaming cycles are widespread and are associated with massive ice-berg calving events which discharge into the Atlantic. Furthermore, it appears that the deglaciation of the BIIS from its maximum extent occurred in less than 2,000 years and decanted some ~2m sea-level equivalent of fresh water into the oceans.

A suite of 350 simulations were conducted in order to fully explore the model parameter space and associated climatic forcing. The results are currently published with Quaternary Science Reviews in a manuscript entitled ‘Dynamic cycles, ice streams and their impact on the extent, chronology and deglaciation of the last British-Irish ice sheet’. Our conclusions can be found Conclusions.

From the links below you can download animated movies and Google Earth plugins of model output from three (of the 16) optimal ice sheet simulations. We believe these simulations provide real insight into the ice sheet's sensitivity, response and flow-regime which resonate perfectly with the emerging dynamic paradigm of BIIS growth and decay which has gained momentum over the last decade. These simulations correspond to an NGRIP scaled climate forcing of ΔT = -10.36ºC and ΔP = 50% (E102b2), ΔT = -11.9ºC and ΔP = 75% (E109b8) and ΔT = -12.0ºC and ΔP = 70% (E109b2). There may be a case for arguing that the median experiment, E109b8 is our ‘most representative' simulation and E102b2 and E109b2 provide useful bounds on potential minimum and maximum behaviour that are in the realms of possibility and still honour the on- and offshore record. 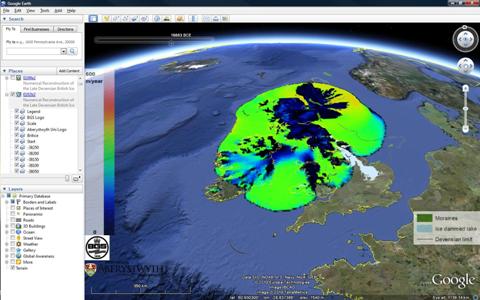 Work is now being focused on modelling the dynamics of the late Devensian Welsh Ice Cap. Although the model is still under development, preliminary results can be viewed in Google Earth by downloading this plugin. The output represents a simple ice-growth model, where climate across the whole domain has been lowered to -11ºC. As such, time is relative to ‘Year 0’ and the model does not refer to any glaciological period yet.