MAGIC-DML is a new Swedish-UK-US-Norwegian-German project that will look at past vertical ice thicknesses in the Dronning Maud Land (DML) area of Antarctica.

MAGIC-DML stands for Mapping/Measuring/Modelling Antarctic Geomorphology and Ice-elevation Change in Dronning Maud Land (DML). We have assembled a major international team who will travel to Dronning Maud Land in 2015/16 to undertake fieldwork, with full logistical support from the Swedish Polar Secretariat (http:// http://www.polar.se/en/expedition/magic-dml).

Reconstructing and predicting the response of the Antarctic Ice Sheet to climate change is one of the major challenges facing Earth Scientists, however the glacial history of Dronning Maud Land (DML) is poorly constrained. Glaciation histories from observations of glacial deposits and eroded bedrock on nunataks, dated with cosmogenic nuclides (CN), exist to the west (Shackleton Range) and east (Wohltatmassivet, Sør Rondane), but there are no absolute age constraints for the 500 km-wide margin in DML that is the focus of this study. MAGIC-DML will test three principle hypotheses that have emerged from previous work on the DML margin:

1. The Antarctic Ice Sheet has experienced long-term reductions in ice-surface elevation since the Pliocene.

2. The Antarctic Ice Sheet margin last retreated from its maximum around 25,000 years ago, at which time the ice surface was many hundreds of metres higher near the coast but no higher, and perhaps even lower, inland.

3. The pattern and timing of maximum ice-surface elevations derived from field evidence can provide new constraints that will help us improve numerical model reconstructions of Antarctic Ice Sheet behaviour.

CN ages for glacially-eroded bedrock and boulders in tills deposited above the current ice sheet, as well as surface drift from blue-ice fields, will allow us to test these three hypotheses. Field results will be used to constrain new numerical ice-sheet model simulations of past ice-sheet behaviour and to inform forward models of the future evolution of the Antarctic cryosphere. 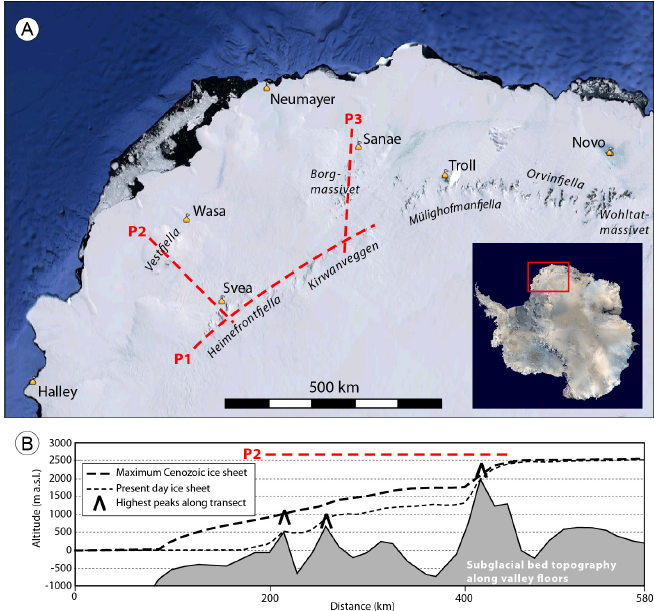 A) Map of DML and Antarctica with location names (from www.antarctic-company.com). MAGIC-DML will study former ice sheet thickness variations along the series of nunataks outcropping from Heimefrontfjella to Kirwanveggen (P1, 500 km) and along two coast-to-inland tracks (P2-P3). B) Profile accross Heimefrontfjella and Vestfjella (close to P2) from 3D ice sheet modelling (see Naslund et al. 2000) showing that the largely vertical changes in ice extent occur in the Nunatak region and that our sites will allow us to examine ice surface changes through the Cenozoic.