Testing the “Snowball Earth” hypothesis in the Arctic

“Snowball Earth” is the name given to a number of postulated Precambrian events, during which the Earth was totally covered by ice (Hambrey & Harland, 1985; Hoffman et al., 1998; Fairchild & Kennedy, 2007). Glacial deposits from such events occur on all continents, two of which are recorded in the High-Arctic, notably in NE Spitsbergen and Nordaustlandet (Svalbard) and in the Northeast Greenland National Park. These events are manifested by thick sedimentary basinal sequences of Cryogenian age (c. 800-630 Ma), and although folded during the Caledonian Orogeny, primary glacial sedimentary and erosional features are exceptionally well preserved. The “Snowball Earth” hypothesis has received considerable media attention, with television programmes by the BBC and ITV, for example. However, the evidence for total glaciation is equivocal, and many geologists believe that glacial conditions were no more severe than during Quaternary ice ages. 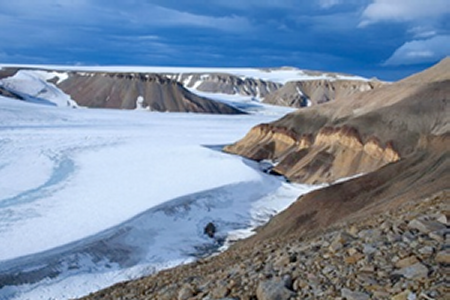 The principal section through the Neoproterozoic glacial sequence in NE Spitsbergen, along the right flank of Blårevbreen in 2010. The prominent yellow band is the globally significant “cap carbonate” (dolostone), below which lies the maroon and grey diamictites of the Wilsonbreen Formation that are interpreted as tillites. 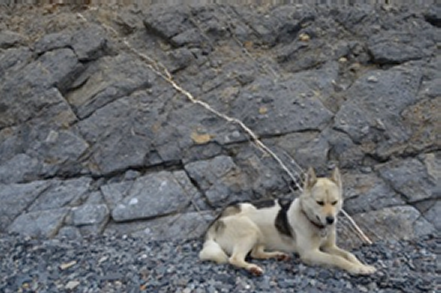 Close-up of the lower of two Neoproterozoic glacial formations on Ella Ø in Northeast Greenland, showing an assemblage of intrabasinal clasts in a diamictite, interpreted as of glaciomarine origin. The husky for scale was one of several belonging to the Danish Army’s Sirius Patrol that followed us around on fieldwork in 2012.

The aim of the current NERC-funded project is to develop a robust understanding of the nature of Earth-surface systems during switches from and to extreme Neoproterozoic (late Precambrian) glaciations in Svalbard and Greenland. The resulting data on the Cryogenian succession will help facilitate the choice of a “global stratotype”, which is needed to formally to define the geological time-scale for Precambrian.

The Aberystwyth component of this research focuses specifically on the glacial sediments. We especially bring to bear our modern first-hand understanding of processes associated with polythermal glaciers (as in modern-day Svalbard) and cold glaciers in arid regions (such as the Dry Valleys in Antarctica). The Neoproterozoic sediments demonstrate a range of terrestrial and marine or lacustrine depositional settings, a fluctuating climate with glacier thermal regimes switching between cold and polythermal. So far, we have found no evidence of complete ice cover over the oceans, but preliminary palaeomagnetic data do suggest near-equatorial glaciation.