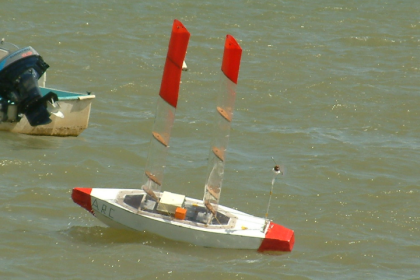 Our second sailing robot, built in early 2006. It is approximately 1.5 metres long and features two 1.5 metre high wing sails. Its powered by 20 rechargeable AA batteries! Computing is provided by a Gumstix single board computer. The hull is built from plywood and is significantly wider than AROO's making it much more stable but also much slower.

It employs two sails and two rudders to allow the boat to sail in a straight line with little or no rudder corrections (as single sailed boats tend to veer off course). These also offer additional redundancy should one of the motors fail. The compass was placed on a swinging arm to keep it level as the compass in AROO tended to generate errors as the boat leaned.

ARC took part in the 2006 Microtransat Challenge in Toulouse, France. Some photos are available here.

ARC is mainly used in research into autonomous survival strategies and longevity in autonomous robots. It is equipped with a number of internal sensors which monitor the state of the robot allowing it to make sensible decisions to keep it operating longer. Research is currently focusing on biologically inspired approaches, these attempt to mimic some of the mechanisms which give biological systems their robustness and survival abilities.