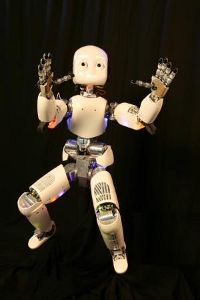 The iCub is a humanoid robot, developed under the RobotCub project. It is a 53 degree-of-freedom robot, roughly 1m tall, and is equipped with visual, vestibular, auditory, haptic, proprioceptive, and torque sensors.

Each arm has 16 degrees of freedom, with 9 of these located in the hands.  The palms and fingertips of each arm contain 108 capacitative tactile sensors on a triangular array.  6-axial force/torque sensors are located in the upper arms.

The legs and torso contain 15 degrees of freedom (3 at the waist), and have 6-axial force/torque sensors located in the thigh.

The head contains 6 degrees of freedom split between the neck and eyes.  It contains 2 Dragonfly2 cameras (640*480, 15fps), 2 microphones and pinnae, gyros, digital compass and accelerometers. The head is also capable of displaying facial expressions with mechanised eyelids and LED displays for mouth and eyebrow positions.

Low level control is provided on board by a PC104 card with dual Intel Core 2 Duo 2.16MHz processors. Data transfer to/from the robot is via a Gbit/s Ethernet port.

The iCub is currently involved with the research project MoDeL. 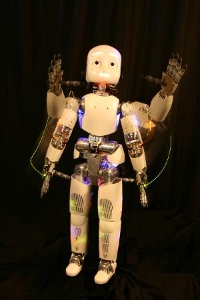 The iCub was successfully used within the IM-CLeVeR project to investigate developmental learning processes.

The research investigated these ideas of staged development and led to an efficient robotic learning architecture in which sensorimotor competence grows cumulatively.

Videos of the iCub in action can be seen from the following pages: