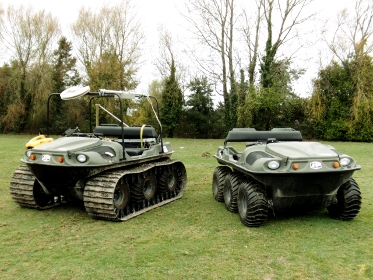 Based on a Argo Frontier 580, `the Argo' is a 6-wheel drive amphibious petrol-powered skid-steer robotic system with an 18bhp engine. The custom built on-board control system consists of a PIC18F4550 micro-controller for low level control of steering (via a LA12 liner-actuator) and throttle (via a high-torque servo) and a GUMSTIX embedded Linux computer for network communications and low-level safety control. Equipped with a SICK LMS111 laser range finder, 9-DOF Inertial Measurement Unit, HMC6343 tilt-compensated compass, ADXL 330 3-axis accelerometer, wheel odometry sensors and a 10Hz GPS, the Argo has a variety of sensors useful for pose estimation, obstacle avoidance and navigation.

The Argo also features a number of scientific instruments, including a terrestrial laser scanner and a penetrometer. The Argo is capable of towing additional scanning equipment such as ground penetrating radar arrays.

The Argo is currently being used for research into robotic survivability and scientific goal achievement techniques and, as a real-world demonstration, The Argo is to be shipped to Greenland in March 2011 for the autonomous scanning of glaciers and the Greenland ice-sheet in an attempt to understand better the effects of global warming and climate change on ice sheet movements. During this project Argo is also going to be used as a base station for a visual navigation platform.

Recently the Argo was used without autonomy in New Zealand as a part of the Rees Scan (http://www.reesscan.org/) research project, collecting terrestrial laser scanner data for the hyper-scale modelling of the Rees River before and after flood events.