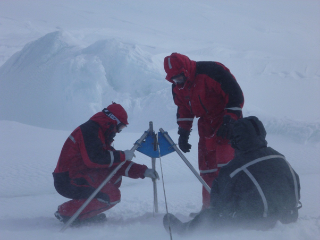 Field-based research on ice shelves has focused, through campaigns in 2008, 2010 and 2012 (with another planned for 2014), on the Roi Baudouin Ice Shelf (RBIS) located on the Princess Ragnhild Coast of East Antarctica. This research is being undertaken in collaboration with colleagues from several European institutions and has been funded principally by the Belgian Federal Science Policy Office (BELSPO).

Research at the RBIS has combined ice coring and borehole drilling by hot water (Figure 1) with ice-surface radar to reveal the internal structure of various ice shelf terrains, including newly-formed ice present within the ‌base of large rifts and contrasting accumulation patterns between the surface of the shelf proper and at the high-elevation Derwael Ice Rise (DIR). To date we have reported on (i) the variety of ice characteristics and types present within the shelf, including at least two forms of ‘marine ice’ forming at the base of the shelf and within rifts, (ii) zones of basal melting and refreezing as a result of oceanic circulation beneath the shelf, identified for the first time in this sector of Antarctica, and (iii) the application of borehole optical televiewing (Figure 2) as a proxy for the density of ice-shelf snow, firn and newly-formed ice.