Dynamics of Linear Dunes in the Namib Desert 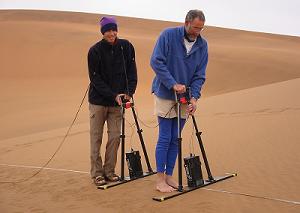 Bristow et al (2007)1 use a combination of ground penetrating radar (GPR) and high precision optically stimulated luminescence (OSL) dating to demonstrate that large linear dunes in the Namib Sand sea are not relicts of previous Quaternary climates as has previously been suggested, but instead are extremely dynamic features, and the oldest sediment found was only 5700 years old.

The linear dunes south of Gobabeb are up to 60 m in height, 600 m wide and stretch for many kilometres. Previous studies using GPR had indicated that although migration of sediment along the axis of the dunes is common, the dunes also migrate laterally (Bristow et al. 2000). In a pilot study on a small dune in the area, OSL dates had demonstrated that such lateral migration occurred at a rate of ~0.1 m per year (Bristow et al. 2005)2, but the behaviour of the largest linear dunes in the region, such as Warsaw Dune shown below, was unknown.

GPR using high power antennae was used to provide images of the internal stratigraphy of Warsaw Dune, and this was used as the basis for a sampling strategy for collection of OSL samples. Drilling through unconsolidated sands was challenging, but on the second attempt was successful. OSL ages for a suite of 21 samples gave ages from 10±3 years to 5730±360 years. The ages confirmed the stratigraphic interpretation based on the GPR survey, and demonstrated that like the smaller dune, Warsaw Dune is also migrating laterally. Although the average rate of migration over the last 5700 years is ~0.1 m per year, the OSL ages suggest that migration has occurred episodically, with a major hiatus in activity during the middle Holocene. 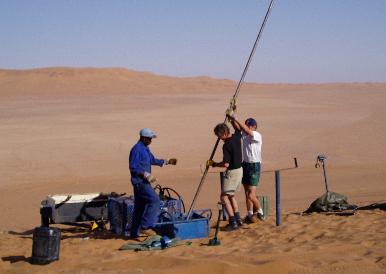