EQuaTe - Bridging Europe: a Quaternary Timescale for the Expansion and Evolution of Humans

EQuaTe is a five year research programme running from 2020-2024 using novel geochronological methods to date commonly occurring calcitic biominerals found in association with key Palaeolithic archaeological sites across northern Europe. The aim of the project is to provide a coherent timescale for these archaeological sites using recent advances in amino acid geochronology and thermoluminescence dating techniques. The EQuaTe project is funded by a European Research Council Consolidator grant awarded to Prof Kirsty Penkman, further details of the project, and the large number of collaborators is given on the EQuaTe project website.

Intra-crystalline protein degradation (IcPD) pioneered by Prof Kirsty Penkman at the University of York provides one key strand of the research and the other is the measurement of thermoluminescence from calcitic opercula and other biominerals.

The TL dating of opercula has been pioneered at ALRL. The TL emission from calcite has been studied for more than 65 years (Duller and Roberts 2015) but attempts to use it to date geological materials have not been widely adopted due to the complexity of the signal. Work in ALRL over a number of years has identified a stable TL peak which continues to grow at radiation doses of more than 5000 Gy (Duller et al. 2009; Stirling et al 2012), implying that it is capable of dating events throughout the entire 2.6 Ma Quaternary period. 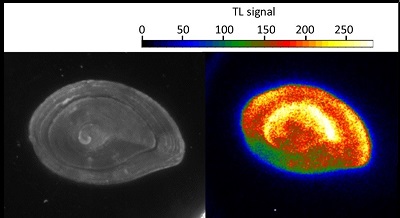 Left: Visible image of a Bithynia tentaculata operculum. Right: Thermoluminescence signal measured from the same operculum. Colours represent variations in the brightness of the TL signal.

Duller et al (2015) demontrated that the emission from calcite at ~580 nm is ideally suited for measurement using the ultra high sensitivity EM-CCD instruments housed in ALRL. This makes it possible to look at variations in the intensity of the TL signal across the surface of biogenic calcites, and more importantly to make spatially-resolved calculations of the absorbed radiation dose. Analysis of the reproducibility of the absorbed radiation dose provides a means of checking for recrystallisation, or other malign effects. 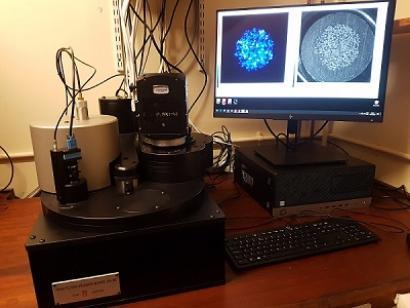 This project has received funding from the European Research Council (ERC) under the European Union’s Horizon 2020 research and innovation programme (grant agreement No. 865222).