Roberts and Plater (2007)1 describe the results of a project designed to understand the evolution of Dungeness Foreland on the south coast of the United Kingdom. The chronology of this important feature on the southern coast of England has previously been defined using historical documents and radiocarbon dating of organics formed in the swales between successive beach ridges. Luminescence provides a direct method for dating the deposition of the sediments contained within the beach ridges themselves. 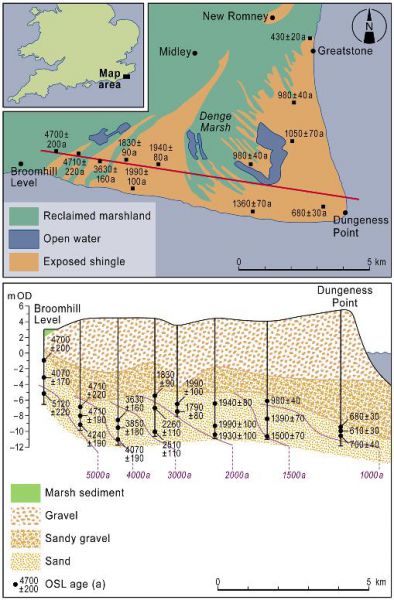 A project funded by English Heritage under the Aggregate Sustainability Levy Fund studied the evolution of Dungeness through the Holocene, using two transects of boreholes, one orientated approximately east-west and the other north-south. The beach ridges visible at the surface are primarily composed of gravels, and thus unsuitable for luminescence dating, but these gravel ridges are formed on an underlying sandy shoreface, and this was sampled for OSL dating using quartz.

Thirty-five OSL ages for the shoreface sands along the two transects provided allowed a three-dimensional model of accretion of the foreland to be built up covering the last ~5000 years (Roberts and Plater 2007, Plater et al. 20072). These ages have also been used by Long et al. (2006) to demonstrate the resilience of this geomorphological feature to changes in sea level, sediment supply and storm frequency through the late Holocene. Understanding the dynamics of this crucial feature would have been impossible without the detailed chronology provided by OSL dating.