Luminescence dating is a powerful tool for deciphering Earth history, and has been applied widely to a range of sedimentary environments. At the turn of the 21st century it was realised that analysis of individual sediment grains would provide a step change in the ability to explore sediments consisting of mixtures of grains that may have had different expoure to daylight at deposition, beein subject to bioturbation, or received different environmental dose rates. However, a constant challenge in analysis of such sediments is that the structure of the sample is lost during sampling and measurement.

A second innovation has been the analysis of a range of samples whose original geometry is retained. These may be snail opercula, rock slices obtained from cobbles or other intact materials. The novel approaches being attempted have been complemented by development of high sensitivity imaging systems capable of capturing the weak luminescence signals emitted, whether that be optically stimulated luminesence or thermoluminescence. 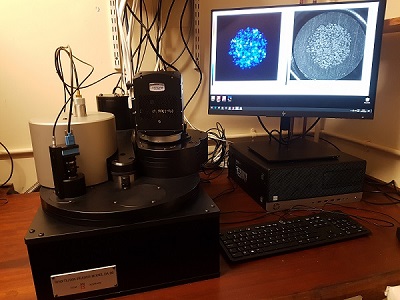 SPARCL is an initiative within ALRL to develop a suite of capabilities to develop and exploit the possibilities offered by being able to resolve luminescence at high spatial resolution, and to couple this with developments in mapping radionuclides. As part of SPARCL, two high sensitivity electron-multiplying charge coupled device (EM-CCD) camera systems have been installed.

One major application of these imaging systems will be to study thermoluminescence (TL) signals from snail opercula made of calcite, an excellent TL dosimeter. Such opercula may be found associated with archaeological sites, and the ERC funded project EQuaTe will couple TL dating of opercula with amino acid geochronology of the same materials.

In collaboration with the Department of Physics we have developed the first high-sensitivty imaging infrared photoluminescence (IRPL) system, and further exploration of spatially resolved luminescence processes are underway.

ALRL and other staff associated with this project: