The primary purpose of the Mangrove Capital Africa programme is to safeguard and restore African mangrove ecosystems for the benefit of people and nature. Healthy mangroves harbour many animals from manatees to sea turtles and provide feeding grounds for migratory birds. They are an essential buffer to storms particularly in the face of climate change and rising sea levels. Healthy mangroves store up to 5 times more carbon than inland forests and are also essential to socio economic activities of the local populations 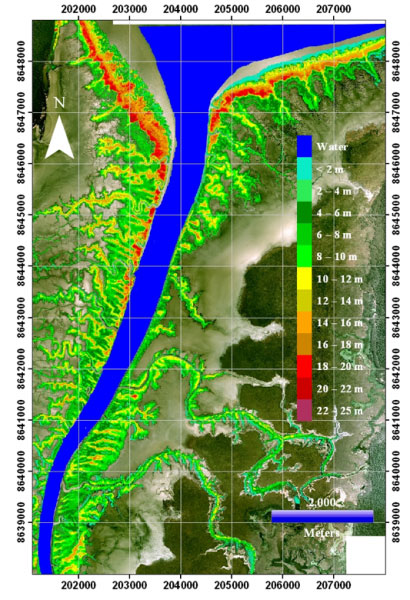 Mangroves occur at the terrestrial/marine interface in the tropics and subtropics and in a wide range of environments.  As such, they protect the coast from wave action associated with storms and their role became particularly evident during the Asian tsunami.  They also play a key role in the economies of many countries, providing breeding grounds for marine life and a source of products ranging from medicines to timber.  Despite their importance, mangroves are still being cleared to allow for urbanisation or agricultural expansion.  In many regions, mangroves are not subject to direct human-induced change but nevertheless experience change as a result of natural or indirect anthropogenic events or processes, including sea level fluctuations.

Research at DGES and with international collaborators has focused on the characterisation of mangroves and the development of baselines of mangrove extent, structure, species and biomass against which to assess change. Key achievements include: 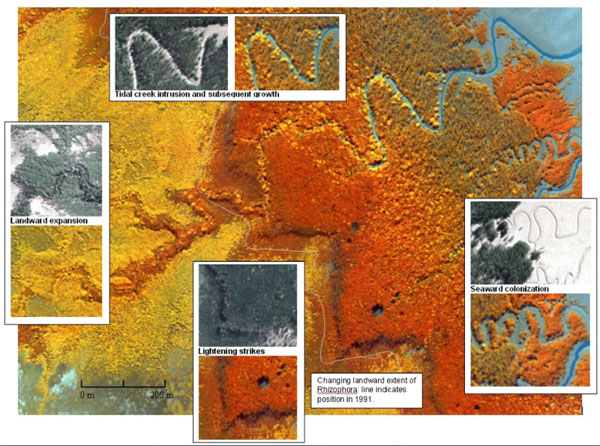 Currently, our research is focusing on the use of the Japanese Space Exploration Agency's (JAXA) Advanced Land Observing Satellite (ALOS) Phased Arrayed L-band SAR (PALSAR) for characterising mangroves and detecting changes in their extent from established baselines.

For this purpose, mosaics of ALOS PALSAR L-band SAR data are being generated for selected regions (northern Australia, the Amazon-influenced coast of South America and Belize) for purposes of change detection. This research is highlighting significant changes in mangroves as a consequence of changes in coastal erosion and accretion and climatic variation.